Following her story in the Mail On Sunday, Tasha Trafford went on the breakfast programme Good Morning Britain… 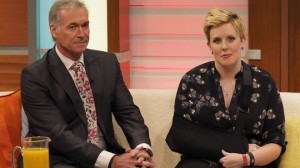 Tasha, who is pregnant with her first baby and has cancer, appeared on the sofa with Dr Hilary Jones about the dilemma she has found herself in.

The nurse – who appeared with her arm in a sling – told presenters Ben Shepherd and Kate Garraway how she was ten weeks pregnant when she first realised the rare type of bone cancer she believed she’d beaten had returned.

She had a pain in her shoulder but because MRI scans cannot be carried out in the first three months of pregnancy – due to the risk to the baby – she had to wait until 16 weeks.

It was then Tasha and husband Jon found out the cancer was back.

Since then Tasha has refused chemo and radiotherapy because of possible side effects to her unborn son.

She told Good Morning Britain she doesn’t rule out treatment completely while she is pregnant and is keeping her options open but would only have treatment if she can be sure it is safe.

Dr Hilary Jones said he believed chemo and radiotherapy was relatively safe in later pregnancy but that it is a ‘fine balancing act’ between getting the best outcome for Tasha – while at the same time not affecting the health of her child.

Obviously as a nurse Tasha is better placed than most women to weigh up the pros and cons.

Currently she has not had any treatment but the pain of the tumour in her shoulder is such that she is supporting her arm in a sling.

Tasha revealed her due date is the 29th December but it is likely her baby will be born earlier – at around 32 -34 weeks – so she can then have aggressive treatment without worrying about her little boy.

Featureworld will be with Tasha following her extraordinary story. She is due to appear in a leading women’s magazine so check back for details…

Do you have a real-life story suitable for Good Morning Britain, a magazine or a newspaper? Contact me with a few brief details and I can tell you straightaway if it is suitable…