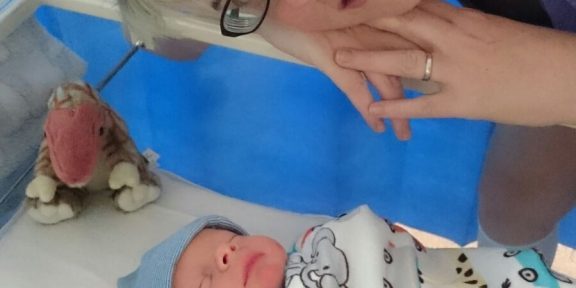 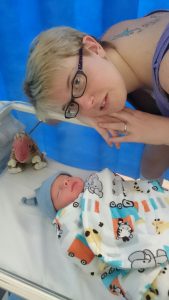 At Featureworld I am lucky enough to be approached by lots of inspiring, brave and wonderful interviewees. In fact I often say that Featureworld sell my story website attracts the most lovely people.

And one of the bravest, most inspiring and loveliest was nurse Tasha Tafford, 33, who came to me after being diagnosed with a rare and virulent form of bone cancer.

It was in remission when she became pregnant with her first baby conceived via IVF. But devastatingly at 16 weeks into Tasha’s pregnancy it returned with renewed aggression.

Doctors offered Tasha a termination so she could take the strongest drugs possible to save her life.

But Tasha refused to consider not having her little boy. And worried about his health, she also refused to take some drugs which might have prolonged or even saved her life.

Thanks to her decision, Cooper was born on 3rd December 2015 bonny and healthy – a wonderful son for husband Jon and gorgeous grandchild.

Tasha was thrilled. She told me all she ever wanted to be was a mum and whatever the sacrifice, Cooper was worth it.

Her story appeared in the Mail On Sunday and Tasha also went on Good Morning Britain.

Her story also touched editors at the Daily Mail – so much so that it was told over two massive pages on Christmas Eve 2015.

However, Tasha’s mother Deb Gallivan has now told me that in November 2016 her beautiful daughter died – sadly three weeks before she would have celebrated Cooper’s birthday.

Debs said: “The 11 months that she was able to have with her longed for baby boy were a blessing.

“Luckily we have the printed articles to share with Cooper when he is old enough to understand. Thank you for the written words.”

I am so glad too that I was able to achieve those articles for Tasha.

And I know for sure Cooper will not only be a much loved little boy but he will grow up with his mother’s love always in his heart.

If you have a sensitive story to share with the nation, contact me for free and confidential advice >>>>