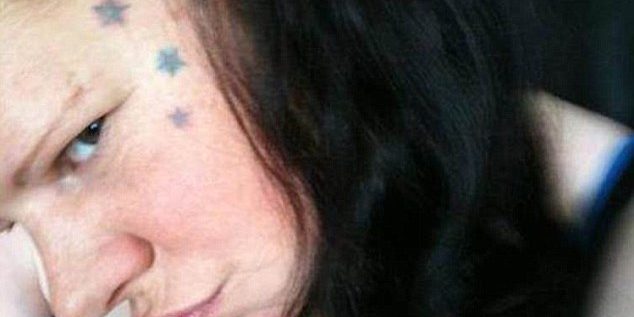 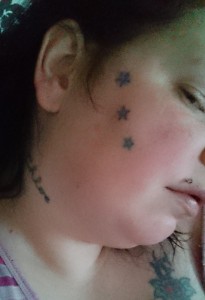 Kay and her stars…

People judge me by the tattooed stars on my face, says Kay…

What do you think of tattoos? Kay Bennett came to Featureworld because she is desperate to get some tattoos she had done removed.

She desperately regrets having the tattoos on her arms, neck, face and hands. But she claims it is the six stars on the side of her eyes which cause her the most problems.

She says she must claim benefits – because no-one will employ her with her facial tattoos.

Kay, 33, says the tattoos she had done in her late teens have turned her into a recluse. She’s forced to claim £14,000 worth of benefits a year –  because the tattoos have caused depression.

They have even caused her to put on weight. She used to be a slim size 10 but comfort eats as she feels so upset when she looks at herself in the mirror – and she is now a size 18.

She  originally had the tattoos after being bullied about her auburn hair at school – believing if she looked ‘hard’ bullies wouldn’t touch her.

At first she liked them but after having the stars etched on her face, discovered she couldn’t get a job.

She believes this is because the ‘manly’ tattoos which cover her arms, neck and face make her look like a criminal. “ I wouldn’t employ me if I turned up looking like this.” And because of the way she looks even her own parents have disowned her.

She adds nice guys don’t fancy her – she only attracts ‘bad boys.’

She longs to have them removed but can’t afford to do so.

Kay desperately hopes someone will come forward who can help remove the tattoos on her face, hands and neck – otherwise she fears she will never be off benefits. And she also wanted to warn other people to think carefully before having very visible tattoos done.

I placed Kay’s story on Mail Online. You can read it in full here   and here in the Mirror.

Do you regret tattoos or another cosmetic surgery procedure? Contact me using the form for free advice on selling your story…

Category: Daily Mail Stories, Sell my story to the Mirror, Stories sold in 2015, Stories sold to newspapersBy Alison Smith-SquireApril 24, 2015
Tags: Health stories
Share this post
Share with FacebookShare with TwitterShare with PinterestShare with LinkedInShare with WhatsApp