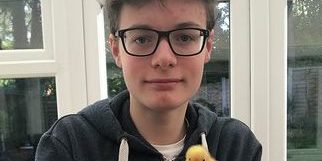 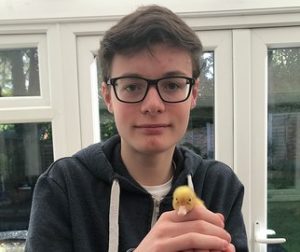 William with the duckling

I was amazed when William Atkins came to me with his story about a duck egg he bought from Waitrose supermarket.

Rather than eat it for breakfast, William, 14, decided to test a theory that it is possible to hatch a supermarket egg.

Using an incubator bought from eBay, William set about incubating half a dozen duck eggs. Incredibly a few days after using a home incubator he could see a heart beating through the shell.

A few weeks on and a fluffy duckling pecked its way out.

William bought the carton of eggs from his local Waitrose – and has amazed everyone with the adorable little duck, which was photographed with William for a piece in the Daily Mail newspaper.

Supermarket eggs are not supposed to be fertilised and capable of hatching. So what happened here?

A spokesperson for Clarence Court, which produces the duck eggs, explained: ‘It is possible that our flocks occasionally and accidentally have a drake (male) among the ducks (females).

Duck egg production is a very small industry, and the separation of males from females relies wholly upon the skill of very few qualified people – the sexer who examines the day-old duckling in the hatchery. Inevitably, the odd sexing error is made. Sexing is so much trickier than with commercial laying hens, for example, which can be separated clearly by the different colours of their down feathers.

Laying ducks are all white-feathered, and it remains difficult to distinguish the sexes even at maturity. Once fully grown, the drake is very similar in size to the duck. Most drakes can be spotted by a little curl to the tail feathers, although not all of the drakes possess this visual marker. 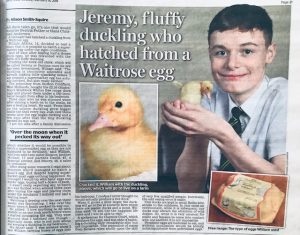 William in the Daily Mail!

‘Our ducks are kept in small flocks with access to the outdoors every day. In this open-air environment, while it is infrequent, our ducks may attract the attention of wild drakes. So, whilst it is very unusual for males and females to come into contact with one another, it is not impossible. Fertilised eggs are completely harmless to eat and without incubation, would be totally indistinguishable from unfertilised eggs.

Ultimately, with an egg that has travelled from our farm to the home via our packing centre, the supermarket depot and store network, it is a feat of remarkably slim odds that a duckling has been hatched. But we acknowledge that it’s not impossible.’

The duckling is now set to live on a nearby rescue farm with other ducks and a pond.

Read the full story and see more photos in the Daily Mail.

Do you have a quirky story for a newspaper? If you have a fun story to share with the media contact me!

Find out more about how Featureworld works

After seeing his published story, William said: ‘I would just like to say that you have written such an amazing article and it is just what I wanted.’