Now 22, she was healed by the love of her boyfriend

Charlene was just 13 she went round to a mate’s house to bake some cakes and instead became the subject of a terrifying sex attack.

The friend she went to see wanted to take her to see her boyfriend.

But when Charlene got there, she found she was part of a sick fantasy to rape a virgin. The pair – Paula Payne, then aged 16, and her boyfriend Stephen Stock, then 24 – had written down the bizarre fantasy in an exercise book calling it The Plan.

And it was Charlene, then an innocent virgin, who became their victim. 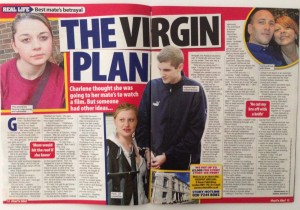 In a terrifying attack lasting several hours she was handcuffed, blindfolded and stripped.

Charlene, who lived with her mum and had never had any sexual experience, thought she was going to die.

The next day she broke down at school and the police launched an investigation. The pair were arrested and in 2006 Stock who admitted rape was jailed for nine years and put on the sex offenders list for life. Meanwhile his accomplice was found guilty to aiding and abetting rape.

Despite the justice that was done, Charlene thought she’d never get over it. She decided she would never have a relationship – how would any man even look at her after this?

However four years ago she met her boyfriend at a bus stop. He was waiting for a bus with his mate and she was waiting with some friends and they got chatting.

Telling him what had happened to her was hard but he was very supportive and gentle. He helped heal her past and they are now living together and happy. She is now a hairdresser and he works as a labourer.

After all these years it is only now Charlene can talk openly about what happened but she feels she has truly put the nightmare behind her and wants to tell anyone else that goes through such a nightmare they can as well.

Charlene bravely waived her anonymity to tell her story to That’s Life magazine, where it appeared over two pages and on the cover.

Have you been involved in a court case? If you have a crime story to sell to a newspaper or magazine, contact us using the form to the right of this page for specialist advice >>>