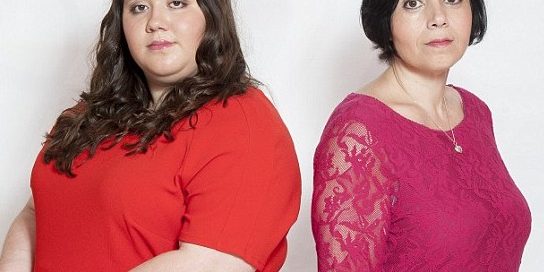 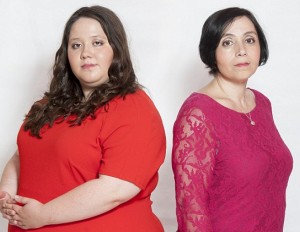 From the Daily Mail…

Having appeared over three pages of the Femail section of the Daily Mail, I was delighted to gain Anna Furniss and her daughter Emily further coverage in a top women’s mag.

Anna originally came to me three years ago to sell a story when she and Emily appeared in The Sun newspaper. Then Anna told how weightloss surgery had enabled her to shed a massive 20 stones. She and her husband were saving up for daughter Emily to have the same op as they’d noticed she appeared to take after Anna with weight problems.

But in a turnaround as Emily got older, she decided she didn’t want a weight loss op, which she deemed could be risky.

Their two sides appeared in the Daily Mail with a follow up in That’s Life mag. Needless to say they still hold their opposing views. Mum wants Emily to have an op before she gets older and possibly larger.  However, although Emily doesn’t rule out surgery in future, right now she says she is perfectly happy as she is and plans to try dieting again.

Anna and Emily’s story is now set to appear in a second magazine! 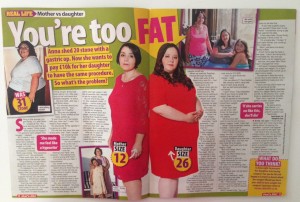 Anna and Emily in That’s Life!

Of course their story also shows that tightrope all mums walk with their daughters – just how honest should we be with them? Should we tell our daughters if they are too fat or thin – or even if we don’t like their boyfriend or think they should get a different job?

Meanwhile if you missed this story, here it is…

Anna Furniss’s life was transformed when she lost 19 stones through gastric surgery. So why is overweight daughter Emily, 19, refusing to have the same op?

Mum Anna, 44, says: ‘Last week I nervously sat down with my daughter Emily for one of our most ‘difficult conversations’ – about her weight.

“I’m too busy to talk now,” she snapped. A trainee midwife, she made her usual excuses – she had some university studying to complete – and then she was gone.

It might sound cruel telling my daughter she’s fat. But it’s not the first time I’ve said it won’t be the last.

Because, at 5ft and 18 stones she is obese – and I believe only gastric surgery can save her from getting even bigger.

Seeing her struggle with her size, being unable to wear High St clothes and go out without attracting stares breaks my heart.

So my husband Paul, 44, and I have offered to pay for a £10,000 gastric weight loss operation, remortgaging our home in Chingford, Essex if necessary. But she refuses – saying she is happy as she is.

Yet I know from experience she would be better off slim.

Eight years ago I myself weighed a massive 31 stones. I had no confidence, lived in baggy tent dresses and if something went wrong in my life, I blamed being overweight. But following risky weight loss surgery to remove two thirds of my stomach and a tummy tuck, I lost 19 stones.

Emily was bullied at school over her weight. So was I. Aged nine I weighed nine stones and was constantly teased at school because I was too big. Doing PE at school was a nightmare so my parents sent me to an activity club to lose weight.

I lost a stone but when the teacher congratulated me in front of the class I was so embarrassed. It was the first time I realised how different I was.

Life worsened when I began senior school and like Emily my age matched my weight. I turned into a recluse. Food was a comforter and ashamed of how I looked, I’d sit at home eating biscuits growing even larger.

Aged 16 I left school and with low-self esteem because of my weight, went straight into a dead-end office job.

I tried dieting and diet pills from my GP but nothing worked. At 21 I met Paul who worked in a nearby office.

After dating for eight months, aged 24 we married. With both of us working we sometimes ate takeaways and by the time we wed I was 23 stones. Looking back I was in denial – I even made sure there were no full-length mirrors in the house because I didn’t want to be reminded of my weight.

And although I went to Slimming World for six months and Weight Watchers for a whole year any weight I lost eventually just piled back on.

Within a year of marrying I got pregnant with Emily and two years after I gave birth to Olivia.

But both times I needed c-sections and one midwife said the fact I was so overweight contributed to making my labours difficult.

After having the children I was working at a call centre part time and there was no time for exercise. I relied on quick meals such as filling plates of pasta and bread followed by more biscuits.

At 30 I weighed 31 stones. I felt so guilty because instead of holidaying abroad we’d go on driving holiday self catering in the UK so I wouldn’t have to talk to anyone.

I was too ashamed to pick my kids up myself from school so my sister used to get them.

My health suffered. Five times I got a hernia in my tummy because my stomach muscles couldn’t cope with the weight. Finally the doctor said the cause was my weight and I had to lose some. Now I was terrified I was so heavy I could die and not see my children grow up.

I began researching gastric operations on the internet and discovered a type of keyhole surgery. Called a duodenal switch, it involved removing three quarters of my stomach but meant I would be able to eat the same foods in smaller quantities.

I went to see my GP and begged him to refer me for surgery. When a doctor said he could help, I burst into tears of relief.

Shockingly I was too heavy to have an anaesthetic safely. He said I had to lose three stones before they could operate. But with a body mass index of 73 I was so obese I was lucky I could walk and because of that, I qualified for the operation on the NHS.

I went on a liquid diet and lost over four stones in six weeks but starving as soon as I got a date for surgery eight weeks later I put a stone back on.

The operation was successful, although afterwards I could only manage two gulps of soup before I was full.

However the weight fell off. I lost a stone a month. Within six months I’d lost six stones and as people began to say I looked better, I felt fantastic.

I began swimming.  At first I felt so self conscious but I discovered I enjoyed exercise.  Within two years I’d lost ten stones.

Aged 34, I went back for more gastric surgery. This was a final part and took away some of my intestine that absorbs fat. It means if I eat 75% fat, only 10% will be absorbed. But it led to me losing a further nine stones.

Two years later – and with loose skin left from the dieting – I underwent a £6,000 tummy tuck, which as my loose skin was so severe, was carried out on the NHS.

I lost 14Ibs overnight. It was the old part of I being got rid of. Finally I got the body I’d always wanted.

We celebrated with a holiday, by flying first class to New York.

Paul said it was like having a new wife. I even went for promotion, becoming a deputy bank manager.

The operation has left me with side effects.  As well as having vitamins fed intravenously, I have to go to the toilet several times a day and can only eat small portions. However, I look back at all the years I wasted fat and vowed my own daughters would never suffer as I did.

I’ve tried to ensure Emily eats healthily. But Emily has inherited my genes and puts on weight easily. I’ve taken her to see our GP and she’s tried dieting but nothing works.

Since she was 16 she’s put on two stones. I’m desperate for her to have this op. Otherwise her weight problem can only get worse.”

Daughter Emily, 19, says: ‘I know mum means well but I wish she’d stop talking about having this operation.

I couldn’t be happier than I am with my life right now. Currently I’m studying to be a midwife, have lots of friends and a great social life. I am even in a relationship with a wonderful guy, who likes me as I am.

I do have to buy my size 26 clothes from outsize shops on the internet and I know I would be healthier if I lost weight.

But I’m not embarrassed by my size. It doesn’t stop me dressing up for a night out and enjoying a good time.

It doesn’t affect my work as a midwife. Certainly I can say to pregnant women who put on weight I know how they feel.

It took mum a year for mum to recover from gastric surgery, which is risky, even potentially life-threatening. I plan to try dieting again. While I don’t rule out surgery in future it would have to be a last resort.”