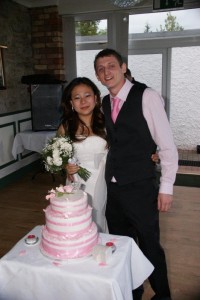 As any bride to be knows months goes into planning that special day – which many believe truly is the best day of any woman’s life.

But for Yanan Sun and Neil McElwee it turned out to be anything but. Having already placed their extraordinary real life story in the Sunday Mirror and the Daily Mail, I was delighted to also place their story in Take a Break magazine.

The bride’s been arrested!

Yanan Sun McElwee, 22, wanted her wedding day to be perfect – but a shocking blunder was to ruin it for everyone… 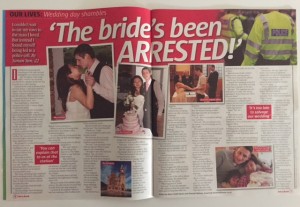 The McElwee’s story in Take a Break…

My friend had suggested a blind date with her friend Neil McElwee. All I knew about Neil was he was a chef. And all he’d been told about me is six months ago I’d come from my home in Shenyang, China, to the UK to learn English.

Now, I found myself looking into the eyes of the most attractive man I’d ever met.

“I fancied you as soon as I saw you,” Neil said to me days later. We were sat on a beach looking out to sea.

Within weeks Neil and I were a couple.

Then in February 2011 I missed a period and a pregnancy test proved positive.

We were both overjoyed.

As we lay in bed one lazy Sunday morning, he put a protective hand over my newly-pregnant tummy.

“What do you think about bringing our wedding forward?” he said.

We set the date for July 19th 2011. Neil booked the ceremony at the Guildhall registry office in Derry, Northern Ireland.

Invitations were sent out to 70 friends and relatives. We organised a £6000 buffet reception at the hotel where Neil worked as a chef.

“I think we should have strawberries and champagne” said Neil.

I splashed £1000 on my dream white wedding dress.

We ordered a wedding cake, hired a BMW and taxis to drive ourselves and our guest to the reception. Then there were the flowers, a photographer to commission, a DJ to invite for the disco.

Our wedding rings were engraved with matching hearts.

On our big day I woke with butterflies in my six-month pregnant tummy.

As my make up was professionally applied and a hairdresser blow dried my hair, I thought about how much I loved Neil.

I couldn’t wait to marry him and for our baby to be born in wedlock.

Neil was already waiting when I got to the registry office. Straightening my dress, I clasped my wedding bouquet and gave him a little wave.

But as I walked up the aisle, the Registrar stood in my way. “Can you and Neil both come with me?”

Maybe it was about the ceremony – or not throwing confetti on the pavement outside.

So I smiled and followed her into a side room.

Behind the door was four men.

One of the men stepped forward. “We’re arresting you on suspicion of having a sham marriage,” he said.

Neil and I looked at one another in shock.

“But there’s been a terrible mistake,” said Neil. His face was white. “All of the papers are in order. Our solicitor is even here among the guests… I can go and get her.”

The man, who was a plain clothes Police officer said, “You can explain all of that to us at the Police station.”

One of the officers had some clothes. Turning to me he said: “You need to change out of that dress.”

I began to cry. This couldn’t possibly be happening.

Neil and I were marched to separate cars in the car park.

“Carry on without us, we’ll be back as soon as possible,” said Neil to his best man as we got into the cars.

An our later we were driven to the Police station and put in separate cells.

Sat on a thin bed in my cell, tears streamed down my face. Worrying I was upsetting my unborn baby, I tried to stop. But as three long hours passed, I began to feel more desperate.

Finally a police officer came in. “You can go,” he said, gruffly.

Outside the station Neil was there. We rang into one another’s arms.

It was too late to marry now. I felt exhausted. I wanted to go home.

But Neil said: “We should go back to the reception – everyone is worried about us. And we’ve paid thousands for that buffet.”

As we walked into the hotel, friends and relatives rushed over to hug us. Neil was right. It was a good idea to come back.

I even put my beautiful wedding dress on to pose for photos.

Only – we didn’t wear our wedding bands. After all, while our solicitor assured us the Police now realised everything was in order and they’d made a terrible mistake, we just weren’t married.

The next day the Registrar rang. She was sorry, she said, and was there anything she could do to make up for what happened.

“Well, you could marry us,” said Neil.

A few hours later Neil and I, dressed in our casual clothes, popped back to the registry office and to sign the papers.

As we said I do, Neil took me in his arms. He tried to make the ceremony special. But it wasn’t the wedding day I’d planned.

That wedding day was ruined.

And when I saw our posed wedding photos, I felt even more upset. Ever since I was a little girl I’d dreamed of a white wedding.  My perfect day was a nightmare.

Three months later I gave birth to our daughter Isabel. But I couldn’t get over what happened.

When I went shopping, I’d worry someone would suddenly tell me I shouldn’t be in the UK.  I didn’t want to go out.  I didn’t even want to answer the front door.

It got so bad I saw my GP who referred me for counselling.

Meanwhile Neil was furious. He’d discovered the Police had known after just 40 minutes that our papers were in order – and yet they held us in custody for four hours. Had they released us sooner we still could have had our big day as planned.

“I’m not going to let the Police get away with it,” he said.

He made a complaint to the Police Ombudsman for Northern Ireland (PSNI).  The hearing was told although one officer claimed he’d carried out the arrest after receiving a letter from the UK Border agency, he had failed to check our documents before making unlawful arrests and detaining them unlawfully. His complaint was upheld and three officers were disciplined.

In February 2015 we took the Police to court taking civil action to get compensation for the blunder. Derry Magistrates court awarded me £12,500 and Neil £9,000.

We felt justice had been done at last.

Neil and I now have another daughter, Sybil, one. We are so happy together that sometimes I have to pinch myself.

However, while other couples have wonderful memories of their wedding day, it’s still too painful for us to talk about.

I only wish we could turn the clock back. No amount of money will ever compensate for what happened.  And we can never undo those memories of a day that should have been so wonderful.”

Sell your story to Take a Break.