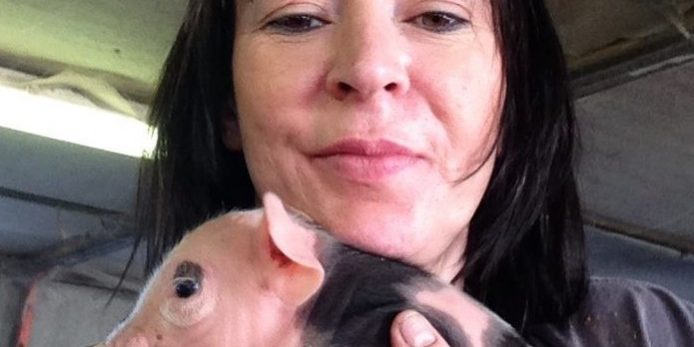 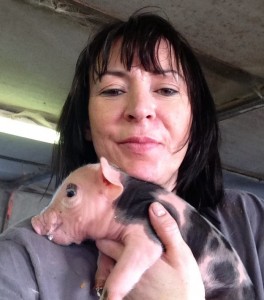 Sue with one of her piglets…

For most people winning the lottery means living the rest of their lives in luxury.

The mum of one says: “It was great winning the lottery. But looking after my pigs brings me more satisfaction than anything money can buy.”

Before her numbers came up Sue was a hairdresser and struggling to save up for a mortgage.

Looking stunning for work – and perfectly groomed – was the norm. 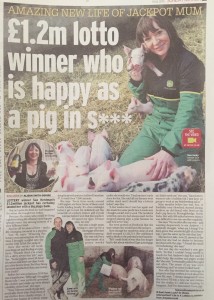 Sue in the Sunday Mirror…

But weeks before she went to see a fortune teller who predicted she would come into money. Sue was so thrilled she even announced the prediction on Facebook.

Incredibly the prediction was correct and in January 2010 she was amazed when her numbers came up.

She planned to go on working in her salon. But six months later she decided to chuck that in.

Just before her win, she’d met Andrew, whose family ran a pig farm – and decided to move with son Jake the 220 miles to be with him.

But she definitely didn’t want to be involved with any of the 7000 pigs. “I couldn’t bear the smell and the dirt,” she says.

However, all that changed when one night she had to help deliver a piglet. The sow was having difficulty giving birth and had Sue not stepped in to help, both mum and baby would have died.

Thanks to Sue pulling the piglet out, both survived and from that moment on Sue knew she’d found her vocation in life. She now gets up at the crack of dawn every day to tend the pigs – and has never been happier.

She said: “Friends still think I’m mad. I could be living in the lap of luxury enjoying my win. 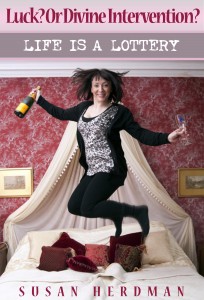 Life is a lottery by Sue Herdman

Instead I am always caked in mud but I love it.”

I placed Sue’s quirky and heartwarming story as a page in the Sunday Mirror newspaper.

Sue, who invested her lottery winnings in property, has now written a book charting how her life changed the day her numbers came up.

“One minute I was struggling to pay the mortgage and the next all my money worries disappeared,” she says, “but my story shows that there is more to life than money.”

Her book, Luck? Or Divine Intervention – Life is a lottery by Sue Herdman is available from Amazon.

Read Sue’s story and see more wonderful photos of her with her pigs on the Mirror website.

Sue’s story – along with a plug for her book – has now appeared on the Daily Mail website and her story has been placed with a leading women’s magazine.

Have you won the lottery? If you would like to tell your story about how the lottery changed your life or if you have written a book and want to launch it in the press then do get in contact! >>>

Category: Sell my story to the Mirror, Stories sold in 2015, Stories sold to newspapersBy Alison Smith-SquireJanuary 31, 2015
Tags: entrepreneur stories
Share this post
Share with FacebookShare with TwitterShare with PinterestShare with LinkedInShare with WhatsApp