At Featureworld we’re not wild about press releases. A press release says, ‘I’ve sent this story out to everyone and it’s not exclusive’ and because of that, even if potentially it looks a good story, for that reason we often decide not to follow them up. 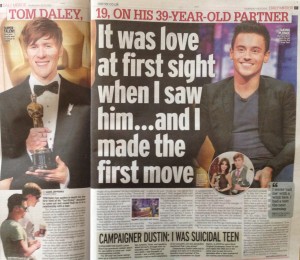 In fact there are other – more effective, more inventive – ways of ‘selling’ your story and gaining massive publicity than sending out a press release to all and sundry.

So we were interested to see that when diver Tom Daley recently came out, he chose not to send out some sort of drab statement in a press release.

Instead, he recorded a cleverly worded emotional confession, which was launched on YouTube.

All credit to his publicist, as this has created the sort of publicity that most people can only dream of. Tom Daley’s ITV entertainment show Splash is apparently due to return to our screens in the New Year – and he is due to appear on Jonathan Ross’s chat show – and this has not only raised his profile in advance but has also endeared Tom Daley to the public.

So why was this approach so much more successful than a press release might have been?

Well, firstly it didn’t scream: ‘I am desperate for publicity’. Journalists actually like to feel they’ve sourced stories themselves. The problem with a press release is it is asking for publicity, which the YouTube video did not.

Secondly, it wasn’t some sort of dull statement – and journalists could take quotes directly from Tom’s outpouring themselves. At the same time, it was footage they could link to from their websites, with a screenshot of it providing an instant photo. Therefore, that one YouTube video provided everything any publication needed for an instant and complete story.

There are times when press releases still work. For example, if you have run a study or survey and come up with some interesting facts and figures, as long as that story is written so it can easily be copied and pasted into a newspaper – and does have some interesting research in it that people will want to read – a well written press release can be very successful.

But if you have an actual story to tell – or some sort of announcement to make – it can prove more effective to tweet it or put it on Facebook. Or link to an unusual video. Of course this will be pointless if you don’t have many followers on social media – but all it takes is for one journalist to pick up your tweet and ask you some more details for your story to get out there.

A story that appears in this way can prove more interesting than something sent as a press release. In fact – and this is one thing a lot of PR companies and businesses fail to grasp – you don’t need to swamp people with desperate press releases. Once a story is out there, it is often naturally picked up by the rest of the media – who might give it more coverage since they feel they are ‘following it up’ themselves. Social media will help a good story to spread and it will naturally be picked up by the national press.

As in Tom Daley’s case, the fact it is not presented in an official statement, press release or press conference, can spike more interest and you can end up with more coverage than if you’d gone the press release route.

Increasingly, celebrities are choosing to spark publicity by tweeting their own selfies, photos and views. And companies and other individuals making announcements via Twitter, Facebook and YouTube – indeed ditching the press release – are we believe set to become much more common.

Are you looking to gain publicity? Talk to us using the form to the right of this page>>>