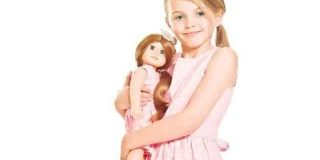 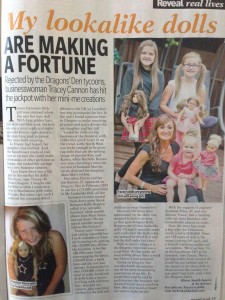 After I placed Tracey Cannon’s incredible story in the Mail On Sunday, I was delighted to secure her with further coverage in top glossy mag Reveal.

Tracey appeared with son Kieran on Dragon’s Den in 2013 with their mini-me dolls which children can style to look like them.

But all five dragons rejected her business, which she had sunk around £100,000 of her own money into.

However since that programme Tracey has gone on to strike a deal with top toyshop Hamleys where they are not being sold.

She says: “Since the story appeared in the Mail On Sunday business has taken off again and I have been inundated with orders for the dolls from all over the world.”

Tracey was thrilled with her story in Reveal magazine, which also put a link to her website mylookalikedoll.com at the bottom of the article.

Category: Stories sold in 2014, Stories sold to a magazineBy Alison Smith-SquireOctober 16, 2014
Tags: entrepreneur storiesreveal magazine
Share this post
Share with FacebookShare with TwitterShare with PinterestShare with LinkedInShare with WhatsApp