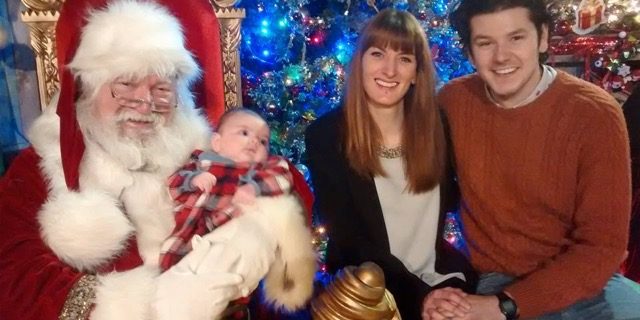 Christmas Eve – A little girl’s first visit to Santa. But behind the smiles lay heartbreak… 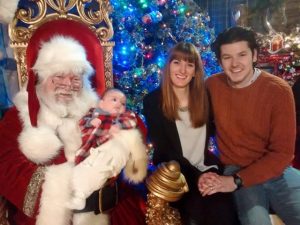 Emily, her husband and their baby Evelyn with Santa

When Emily Locking, 34,  gave birth to a little girl, she and her husband were thrilled – and looked forward to their first Christmas with their new baby.

During her pregnancy Emily had suffered bizarre pains under her ribs. She’d mentioned it several times to doctors and midwives but they all said it was just where her unborn baby was kicking and there was nothing to worry about.

However when the pains continued after she’d had her baby girl, Emily saw her GP. When  he suggested tests she had no idea of the nightmare that was to unfold.

For ten weeks after her baby was born – and on Christmas Eve 2015 – doctors confirmed to Emily the terrible news she had bowel cancer which had spread to the liver.

Shockingly – moments before this photo was taken – she’d taken a phone call confirming tests that showed the cancer was inoperable. Doctors estimated she had just eight weeks to live without chemo – or 12 months with. However, the chemo would only be palliative – she could not be cured.

Despite being given such an awful prognosis the couple went on their planned visit to Santa’s grotto – for their little girl’s sake and because they wanted her to have a lovely photo to look at – they managed to put on beaming smiles. 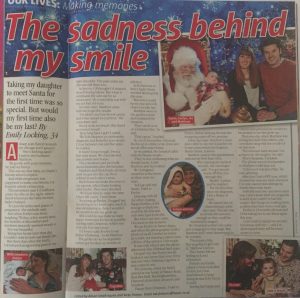 Emily in Take a Break

But after this photo was taken the couple broke down. It was then they decided if this was to be the last Christmas it would be the best one ever – and you can see some of their family photos below.

In the New Year 2016 Emily’s mother in law found a private consultant and urged them to seek a second opinion.

The news was good. This consultant felt something could be done. He said he’d seen worse and Emily might even be cured. She has since endured multiple rounds of chemo. The result is her tumours have shrunk dramatically and she is now having radiotherapy to shrink them further.

It means they can be removed and Emily is preparing to have surgery next year.

Evelyn is now 14 months old and Emily is going to take her daughter to see Santa this year.  But she already has the best gift of all – hope for the future. Needless to say there won’t be any tears when they visit Santa this year – in fact the couple can’t wait for Christmas!

Emily’s story appeared in the Christmas edition of Take a Break magazine. Story to sell to Take a Break or another magazine? If you would like to see your real-life story in print, contact me with some details using the sell my story form to the right >>>

Category: Stories sold in 2016, Stories sold to a magazine, Take a Break storiesBy Alison Smith-SquireDecember 15, 2016
Tags: Cancer storiesHealth stories
Share this post
Share with FacebookShare with TwitterShare with PinterestShare with LinkedInShare with WhatsApp