Kai Windsor and his mum Rachel go on ITV THIS MORNING … 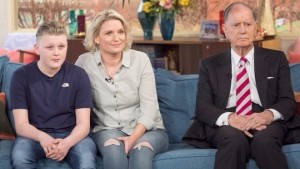 Kai and Rachel on TV!

Featureworld interviewees Kai Windsor, 11, and his mum were interviewed by Holly Willoughby and Philip Schofield in a debate about whether the NHS should be funding transgender treatment for children.

Kai, who was born a girl called Kaia, and his mum Rachel first approached me last year with the aim of raising awareness about transgenderism in children.

I placed their story in The Sun, The Daily Mail, That’s Life magazine and Woman magazine.

This week I arranged for Kai and Rachel to go on ITV This Morning after doctor Robert Lefever spoke out claiming the NHS is over diagnosing gender identity issues in children.

Dr Lefever claimed treatment for transgender issues has become a ‘fad’ and it should not be a priority for the NHS to treat.

He added that the NHS should stop funding people’s personal choices and direct its money elsewhere for illnesses such as cancer and diabetes.

However Kai told of how he suffered from depression and his mental health spiralled out of control until he was saved by treatment. Now, living life as a boy, he is finally happy at school and proud.

Mum Rachel also said that if kids don’t get treatment then the suicide rates are high.

The debate then became highly charged when Holly Willoughby stepped in to call the doctor ‘old fashioned.’

She said it wasn’t like cancer. “You have to listen to the children which is exactly what the NHS is doing.”

The heated debate was picked up by a number of national newspapers appearing on many websites including The Daily Express, Daily Mail and Daily Mirror.

Rachel and Kai were delighted because they both feel the more this issue is openly discussed, the easier it will become for other children and parents to get the help they need. Rachel told me she and Kai had a wonderful time on ITV This Morning.

If like Kai and Rachel you would like the opportunity to get your story out there in the national press and on TV then contact me for free, friendly and confidential advice using the form on this page >>>