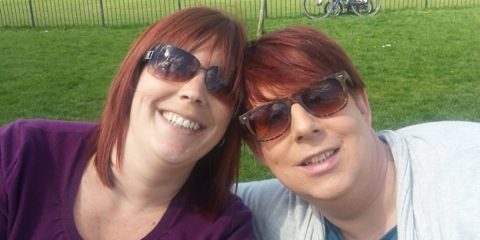 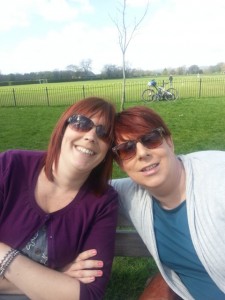 After their story appeared over two pages of the Mail On Sunday newspaper, I was delighted to secure further publicity for Samantha and Stacy Collins.

Now their amazing story has appeared on the cover and over two pages of Take a Break magazine.

Samantha is currently transitioning from a man to a woman. But as husband Glenn, when she first realised she’d been born as a woman in a male body, she dreaded telling wife Stacy.

She and Stacy have four children together and as Glenn, Samantha adored being a dad. She also loved Stacy.

And Stacy knew something was up with husband Glenn. As Glenn, Samantha had become so withdrawn Stacy believed she might be having an affair. Here, in Take a Break the two of them describe how they have both come to terms with their new lives and how they are happier than ever… you can read their story below…

Sell your story to a magazine like Take a Break and a newspaper such as the Mail? Contact me for more details using the form to the right of this page>>>

Sitting in a bar I looked up at the man behind it and our eyes met. I was aged 18 and Glenn Collins was 29.

Love at first sight. Soulmates. That was Glenn and I. That night we started chatting and hours later, over a coffee, we were still locked in conversation.

Glenn told me he’d been married before and had two twin sons.

‘I thought I was gay,’ he said, explaining why he and his wife had split. 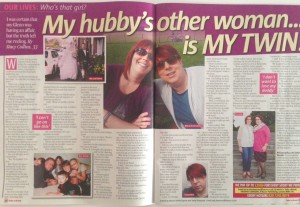 Stacy and Samantha even look alike…

But as we kissed he certainly didn’t seem gay now.

A year later our daughter Megan was born. A year after that we married.

As I walked down the aisle in my white wedding dress I felt the luckiest woman alive.

With me at home looking after them and Glenn earning good money as a lawyer, we should have been happy.

Only Glenn was depressed. His GP referred him for counselling but nothing seemed to lift his mood.

And then one day when he came back from a business trip, I noticed he looked different.

His skin was smoother, and he had on some new jeans.

I went to ask how he was feeling. But at that moment the boys ran into his arms.

As I watched him cuddle our sons, I couldn’t help the niggle of worry that was deep inside me.

Something was wrong. Glenn seemed so distant. He’d been away on business a lot lately.  Suddenly I was crying, sure Glenn was having an affair…

A few days later after dinner Glenn said, ‘Sit down. I’ve got something to tell you.’

My mouth went dry. He looked so serious and I just knew then he was going to tell me there was another woman.

Nervously I pulled up a chair.

‘I’ve been having gender issues,’ he said, ‘and I want to live as a woman.’

Had I heard him right? My masculine husband – the sporty Glenn who adored rock climbing, biking and visited murderers in prison for a living – wanted to be a woman.

It was a bombshell. But as I reeled in shock, worst was to come.

When he was away on business he’d been dressing as a woman. He’d bought a wig, women’s clothes and make up. ‘Some of it is stashed away in the lock up,’ he admitted.

I felt sick and strangely betrayed.

Why didn’t I notice? And why didn’t Glenn tell me before.

Part of me was relieved that Glenn wasn’t having an affair.

But immediately the kids came to mind. How would they cope with something like this?

They’d never be able to bring friends home. I imagined they’d be bullied at school.

‘We’ll have to talk about it another time,’ I told Glenn.

My thoughts were all over the place. I didn’t know what to say. Maybe it was another phase. He’d been depressed after all. If we didn’t talk about it, it might go away.

Eight weeks passed. During that time we carried on normal domestic life.

Yet underneath I was in turmoil.

Then one day as the kids were eating tea, I got a phone call from Glenn.

He was away on business and ringing from a hotel. ‘I can’t go on like this,’ he said.

His voice sounded strained. ‘What I said a few weeks ago. I still feel the same.’

I put the phone down. Glenn’s wanting to be a woman wasn’t going away.

‘Kids, I’ve got something to say,’ I said sitting with them at the kitchen table. ‘You all know daddy’s been sad for a while now. He says it’s because he’s a woman inside and he wants to live as a woman.’

There, it was out now.

‘What?’ said Megan as she tried to digest what I’d said, ‘ are you going to split up with daddy?’

Meanwhile Alex burst into tears. ‘I don’t want to lose my daddy,’ he sobbed.

I gulped. I didn’t know what the future held either but I didn’t want them to worry about it.

Strong words but underneath I was trembling.

The next day Glenn rang the school and told their teachers.

We decided Glenn would still be Glenn when he went to work. And in the evenings he would dress as Samantha, the woman he wanted to be.

The first time Glenn came downstairs dressed as a woman I giggled.

‘You’re going to need to do something about that facial stubble,’ I said.

And when he began taking women’s hormones and growing breasts, it seemed incredibly odd.

But as Samantha, Glenn was happier.

No longer depressed, he became his old chatty self.

Megan did a talk at school about how her dad was becoming a woman so all the pupils knew.

We told friends and the rest of our family. My parents and Glenn’s parents were shocked, although his mum admitted she’d caught him a few times when he was young trying on her make up.

Then in January (2014) Glenn decided to come out at work. My old worries returned. Life had gone back to some sort of normality. But how would his bosses take his news? Would he lose his job?

Incredibly they were understanding.

‘They are sending a letter to all my clients telling them I am now going to be addressed as Samantha Collins,’ he said.

By now he’d had laser treatment to get rid of stubble. His figure had become more womanly with B-cup breasts.

‘You and Glenn look alike,’ joked a friend to us one day.

I took it as a compliment.

After all, when we went out in the street I imagined people just thought we were two friends out together with our kids for the day. No-one ever took a second look.

A year on since Glenn’s shocking admission in the kitchen, I can’t believe how happy we all are.

Samantha and I now live together as two women. Because of the hormones, Samantha’s male genitalia have shrunk and we can’t have intercourse. But we still share a bed and find other ways to be intimate.

I have never thought of leaving her. Glenn or Samantha, he or she is still the same person inside. Still my soulmate and the kids’ loving daddy.’

Samantha, 44,  says: ‘The first time I realise I was different was when aged nine, playing a game, I became upset as I wanted to be a princess. Schooldays were a nightmare as I couldn’t relate to boys and yet I wasn’t a girl either.

As I reached my teens, I felt feminine and yet confusingly fancied men and women.

By my twenties, I’d turned to drink as a way of coping.  But longing to be ‘normal’ in my mid twenties I married.

When my wife got pregnant with our twin sons I was thrilled and yet as her pregnancy progressed, I became jealous of her that she was able to carry the babies and I wasn’t.

Three months after they were born, and with me eaten up with resentment that I was never going to be a ‘mother’ and experience childbirth, we split up. By then I’d also decided I must be gay.

However, when aged 29 I met Stacy, life changed. It was love at first sight. The first night we met we were up all night chatting. Stacy was my soulmate – and that was all that mattered.

I should have been happy but the niggle was still there.

Then one day in 2006, I secretly bought a wig and some women’s jeans. Sitting in the hotel room with my wig and some make up on made me feel calm. It wasn’t a turn-on – I simply felt relaxed, myself.

From then on whenever I was away on business I’d dress as a woman.

On the outside I was still Glenn who had sex with Stacy but the reality was increasingly, with such a huge secret hanging over me, I felt isolated.

One day feeling suicidal I rang my GP.  I was referred to counselling and it was then the psychologist suggested I had gender issues.

But I worried coming out would ruin everyone’s lives and telling Stacy was the hardest thing I have ever had to do.

But now we share the school run and everyone’s adapted my new identity.

Friends and my twin sons Connor and Callum, 17, understand. But sadly my parents and Stacy’s parents, have found it hard to accept.

At work, I’ve had the odd look from a custody sergeant when I’ve turned up at a police station, but other than that no-one has ever said anything else.

I do find I have more in common with my daughters. For example, whereas Stacy rarely wears make up and sticks to casual clothes, I adore chatting about nails and high shoes with Megan. But the children still call me dad and to all intents and purposes our relationship hasn’t changed. If anything I am a better parent as I am no longer depressed but as Samantha am true to myself.

Now I am on the waiting list for a full sex change – I hope to have that within the next 18 months – and just feel incredibly lucky.’

Read other transgender stories sold by Featureworld to newspapers and magazines here.

Category: Stories sold in 2014, Stories sold to a magazine, Take a Break storiesBy Alison Smith-SquireOctober 27, 2014
Tags: Transgender real-life stories
Share this post
Share with FacebookShare with TwitterShare with PinterestShare with LinkedInShare with WhatsApp