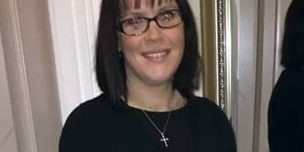 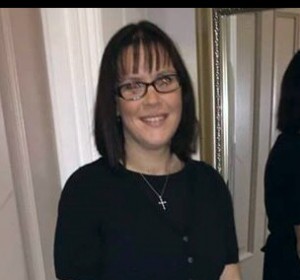 Featureworld is famed for gaining interviewees multiple deals and the widest publicity possible – all with an interviewee’s consent of course.

When mum to be Sophie Clarke contacted me she wanted to celebrate her extraordinary weight loss – and I certainly achieved that for her when I placed her story on Mail Online, one of the biggest media websites in the world with millions of readers!

I am now delighted that her extraordinary story – Sophie got so fat when she was pregnant with her twins that she was sterilised during their birth – has appeared on the front cover and over two pages of Real People magazine!

Sophie already had three kids and was overweight when she got pregnant with twins. But she was in for a shock when she went for a routine antenatal check up and was told her health was seriously at risk. 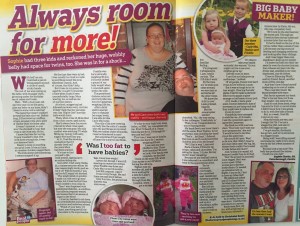 After a worrying pregnancy she gave birth to healthy little girls – but her doctors were so worried she could accidentally fall pregnant again and risk her health she was sterilised during the c-section.

Yet while the sterilisation during her daughters’ birth might to some seem extreme, she credits it with forcing her to lose almost half her body weight.

For since the birth of Kayla and Katie 22 months ago, Sophie has lost 12 stones, going from a dress size 26 to a neat size ten.

‘Although I was upset at the thought of not being able to have more children, the shock of being sterilised because I was so overweight gave me the kick start I needed to do something about it,’ she says, ‘I now look back and realise having the twins and then being sterilised has probably saved my life.’

Sophie, 29, from Peterborough, who has three other children  – Freddie, six, Carly-Mai, five, and Teghan, three – with husband Liam, 30, was initially shocked when she discovered she was expecting twins.

“Liam and I were not planning more children and I was on the pill when I found out I was pregnant,’ she says, ‘but there was never any question of not going ahead with the pregnancy and although we were both shocked again when we discovered I was having twins, we were also thrilled.’

However her joy turned to fear when on her first visit to the midwife routine tests showed she had developed gestational diabetes.

‘The midwife said it was almost certainly because I was so overweight and as a result I had to be referred to a consultant for extra monitoring.’

And nothing could have prepared the couple for what happened next.

Recalls Sophie: ‘At 31 weeks pregnant the consultant sat me down and was blunt.  Firstly he said the diabetes could cause the girls to grow quite large so I would need a c-section.

‘And then he said another pregnancy would most likely kill me as even if I weren’t pregnant, I was at a high risk of becoming a diabetic, ending up in a wheelchair and having a heart attack.

‘As such doctors suggested I should not become pregnant again and I could be sterilised during the c-section.’

The suggestion came as a shock. She says: ‘While Liam and I felt our family was complete we’d never contemplated something as final as being sterilised.  However, doctors were concerned if I wasn’t sterilised during the twins’ birth, I would have to wait for a sterilisation appointment to come up and I would need to find time away from the children to undergo a second operation and anaesthetic.  I got pregnant with Teghan while I had the contraceptive implant so there was a real danger I could accidentally fall pregnant again. Which is why we consented to go ahead.’

But following their birth Sophie sank into a depression.

She says: ‘I’d always been a big girl but at almost 23 stones the pregnancy had left me the heaviest I’d ever been. I knew I was far too big for my petite 5ft 5” height.

‘But the thought of dieting filled me with dread. I’d always adored my food, especially takeaways.

‘Liam and I had at least a couple of takeaways a week – usually a Chinese or pizza. The rest of the time as a busy mum I relied on fast food from the freezer such as chips, pizza and battered fish.

‘I loved crisps, biscuits and chocolate. I didn’t want to give it up. And I had so much weight to lose I almost didn’t know where to start.

‘However my health was getting worse. I suffered from terrible asthma attacks and it played on my mind that if I didn’t do something I could have an early death.

‘The thought of not seeing my children grow up was devastating.’

So when a friend said she was joining a local slimming class (Slimming World) and asked if she would like to come along, she decided to go.

She says: ‘In hindsight I’d fallen into a rut with eating.  Until the birth of the twins I’d been in denial about how unhealthy I was and I’d simply allowed the weight to creep on.

‘I was also worried that dieting would be too difficult and imagined I’d be starving all the time.’

So it came as a welcome surprise to discover simply swapping what she was eating for other healthier foods would make such a big difference.

‘I always found water too bland so always drank fizzy drinks,’ she says, ‘now I found drinking green tea, ordinary tea and coffee without sugars was just as satisfying. And that cut out a massive amount of sugar and calories from my diet.’

With takeaways out – and healthy home-cooked meals in – the weight fell off and within weeks Sophie had lost a stone.

‘That spurred me on and I became more adventurous trying out new foods.’

‘I still have the odd treat such as a cupcake on the children’s birthdays,’ she says, ‘but these days I realise that is a treat and not something to eat every day.’

A bonus is husband Liam has lost three stones and the children also eat more healthily.

Best of all her diabetes has gone and so has her asthma.

She says: ‘I feel so much healthier and have so much more energy. As I was limited to outsize shops, I used to hate shopping for clothes but now I adore it. My biggest regret is I simply didn’t diet before and I only hope telling my story inspires others that however difficult it might seem, if I can do it they can.’

She adds: ‘I know I am lucky to have five beautiful children but a part of me will always regret being sterilised as it does feel as if something has been taken away.

‘However at the same time it gave me the push I needed to really change my life. If I hadn’t been shocked into losing weight maybe I would still be overweight.

‘Now I look at my little girls and think, they really did save my life.’

Dinner: Takeaway or battered chicken and chips from the freezer.

Do you have an amazing weight loss story you want to share with the nation? Celebrate your weight loss with an article in a national newspaper or magazine … contact me to find out how! >>>

Category: dieting story, sell my story to Real People, Stories sold in 2016, Stories sold to a magazineBy Alison Smith-SquireApril 4, 2016
Tags: Twins triplets quads and more storiesWeightloss
Share this post
Share with FacebookShare with TwitterShare with PinterestShare with LinkedInShare with WhatsApp