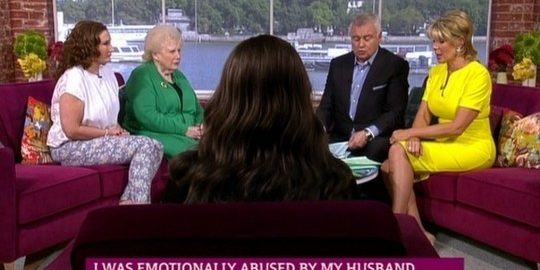 Three weeks ago Julie came to Featureworld because she wanted to help other women who’ve gone through domestic violence. 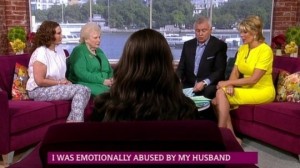 Julie on This Morning

Julie’s husband has recently been convicted of physically assaulting her. But what was just as bad – if not worst – was the emotional abuse she suffered at his hands throughout their marriage.

This included controlling her and the children. Sometimes this manifested itself in little things such as only watching what he wanted to watch on television. But it went much further than dominating the TV changer – he didn’t allow her access to their family finances, and even her saying she wanted to meet a friend could send him into a rage.

When he was in a rage he would go wild, throwing plates, glasses, bottles and even the children’s toys.

Once he got them all up in the middle of the night to throw them out of the house – she ended up sleeping in the car.

She was never allowed to sit at the table and eat – instead they always had to sit in front of the TV. If he didn’t like the food, he could kick off and smash his plate.

He would pick arguments for the sake of it – blaming her for the house not being tidy and bossing everyone around to get him drinks, food or even clean his shoes.

If someone wanted a bath he might refuse saying there wouldn’t be enough hot water for him.

Once on their wedding anniversary he took Julie to a hotel and even bought her flowers. But after picking a row about something tiny, he threw the flowers out of the window and threw wine all over the hotel room. Julie had to clean it up.

During one row he threw all her clothes out of the window so they landed on a rose bush. She had the humiliation of going out to get them.

And if the children annoyed him, he would make them stand against the wall, shouting at them to stand to attention.

Julie tried to leave him but she loved her home and she had nowhere to go. She was also embarrassed to reveal the level of her home life.

However, after one particularly bad row when she was assaulted, and children became involved, she called the police who arrested him.

With the help of various aid groups she has now found a place and is much happier.

Julie went on ITV This Morning to demonstrate how damaging emotional abuse can be – and in the light of new laws which could be introduced to criminalise such bullying.

The law would make the worst cases of non-violent ‘controlling behaviour’ a jailable offence.

Theresa May, the Home Secretary, who had published the new proposals, said: ‘Within every community there are people living in fear of those closest to them. The terrifying reality is that for the most part these appalling crimes happen behind closed doors. We must bring domestic abuse out into the open and send a clear message that it is wrong to put your partner or your family in fear.’

Julie was happy to be fully identified on ITV This Morning but as these new laws have not yet come in – they are still at the consultation stage – legally she could not talk openly about her story and so was only shown by the back of her head. This is despite the fact her former husband has appeared in court and been found guilty of physical assaults on her.

She was joined by experts who helped give their views on the new laws and Julie’s experience.

I was delighted to give Julie the chance to bravely get her story out there and also give Julie and her children a wonderful day out in London.

Having stayed overnight at a hotel close to the studio, the family were picked up after breakfast and driven to the studios. After their interview they planned to enjoy some time seeing the sights in London.

Have you been the victim of domestic violence? If you would like to help others to have the courage to leave their violence partners, do get in touch using the form to the right of this page>>>