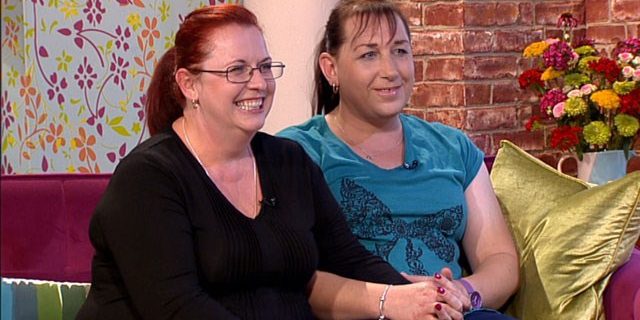 Trevor Askey – a former soldier who is transitioning to a woman – and wife Victoria appeared on ITV THIS MORNING. 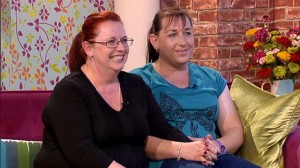 Having previously appeared over two pages of the SUNDAY MIRROR and then in TAKE A BREAK magazine, we were delighted to secure a spot for Victoria and Treva Askey on this top ITV chat show.

Trevor used to be a macho soldier but with wife Victoria’s full support, Trevor is now Treva.

The pair looked similar with their hair in pony tails as they chatted to Eamonn Holmes and wife Ruth Langsford on the This Morning sofa.

Despite her previous macho image, Treva told how after 35 years of living as a man, she knew more than ever she wanted to live as a woman and is now much more fulfilled.  The couple, who are happier than ever, plan to remain married also enjoying life as two women.

Victoria says she loves the person inside and Treva told how although she confessed she wanted to be a woman before they married, Victoria was the only person she could trust.

Treva added she had lived as a man for so long due to ‘pressure in society’ and how she has kept in contact with many of her soldier friends, who’ve all been supportive.

Victoria said her own family have also been supportive – they have always been honest with her children and so they are accepting – and Treva told how she was going through the process of having a complete sex change.

Treva added her life now she has made the decision to change sex is so much easier and it is as if a big weight has been lifted off her.

As a couple they are in a ‘good place’ going shopping together for clothes and make up. However, while they are a couple, Victoria doesn’t label herself as a ‘lesbian’ and their relationship is simply about love.

Aptly their appearance on ITV This Morning took part on International Transgender Awareness Day. Victoria is also writing a book, which she hopes will help others finding themselves in their position.

Find out more – selling my story to television.

At Featureworld we feel privileged to be able to help people get their stories out there. If you have a similar transgender story to sell, then do contact us for some free advice using the form to the right of this page>>>