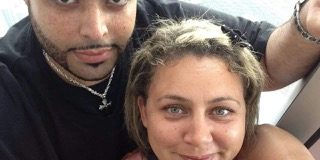 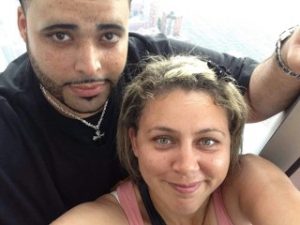 When she crashed into his car on the game, she apologised in a message

After 18 months she flew from UK to the US

They now have a daughter, nine months, and are set to marry

A couple are set to wed – after she crashed into his car in a virtual computer game.

Mum of three Leanne, 37 had recently split up from her ex and was playing her eldest son’s game Need for Speed.

After crashing into another vehicle in the game, she sent the player – Jay, 33, from the US –  a message to say ‘sorry!’

The couple then got chatting. Jay, a security guard, had also recently finished a relationship – and within weeks the pair were spending six to eight hours a day on the phone. 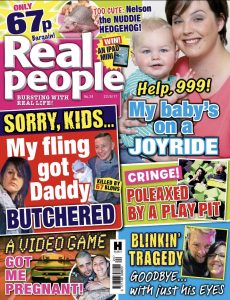 Leanne’s story made the cover!

By the time they plucked up the courage to ‘meet’ on Skype they’d been chatting for nine months – and Leanne says they were already in love.

Nine months later Leanne flew to the States to meet Jay with the couple cementing their romance.

After coming back to the UK with Leanne, Leanne got pregnant and in May 2015 gave birth to their little girl.

Sadly the couple are having to live apart – due to Visa restrictions Jay had to return to the US while they await his visa to be granted.  But as soon as that is secure the couple, who have got engaged, plan to marry.

Leanne’s story appeared on the cover and inside Real People mag!

Did you meet the love of your life an unusual way? If you have a romantic story to tell do contact me using the sell my story form to the right of this page>>>

Category: sell my story to Real People, Stories sold in 2017, Stories sold to a magazineBy Alison Smith-SquireJune 15, 2017
Share this post
Share with FacebookShare with TwitterShare with PinterestShare with LinkedInShare with WhatsApp