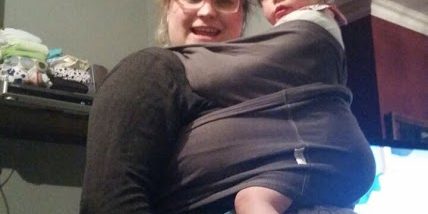 Breastfeeding story about wet nursing in THE SUN newspaper… 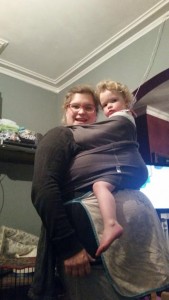 Nikki Kamminga contacted me because she wanted to promote breastfeeding and also show how the kindness of other mums who have donated milk – and who are also breastfeeding her baby – has made such a difference to her life.

Many new mums stack the freezer with ready meals for those hectic first few weeks when they are busy with their newborn.

But Nikki, 29, has ready meals with a difference on standby – a chest freezer in her kitchen full of breastmilk from other mums.

Three other mums have also volunteered to be wet nurses. They are popping into Nikki’s home to help feed baby Bastian.

They simply pop Bastian on their own breast. 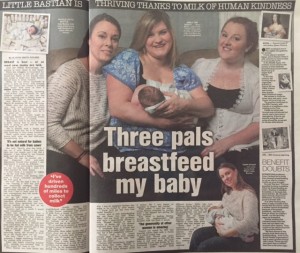 Nikki, Lorna, Chelsea and baby Bastian in The Sun!

And Nikki puts that down to the fact he is receiving so many nutrients.

Nikki asked for other mums to donate breast milk because with first baby Ayla, two, she had difficulties producing milk herself.

The difficulties stemmed from a breast reduction operation Nikki had when she was younger.

By the age of 13 her breasts measured 34JJ and shortly after her 18th birthday she underwent a breast reduction.

Sadly she suffered necrosis where some of the breast tissue died. Despite even having leeches applied to her breasts to stimulate blood flow she had to have two further operations and was warned by doctors she was likely to be unable to breastfeed at all.

Nikki desperately tried to feed Ayla but it was virtually impossible and she resorted to formula.  She didn’t want her baby to have cow’s milk. Nikki stumbled on a breast milk donating site on Facebook and Ayla loved it. But it was hard to source and so Nikki had to keep resorting to formula again.

She was therefore determined with second baby Bastian that would be different – and she would not run out of milk again. During later pregnancy she began expressing her own first milk and she also asked for other mums to donate their milk, which are stored in packs in her freezer.

She was delighted when two friends, also offered to co-feed Bastian.

Incredibly Nikki, who runs a charity, Project Kidogo, which provides reusable menstrual products,  has received donations from over a dozen mums and she is also managing to feed Bastian herself.

Nikki, whose husband is supportive, believes breastmilk even from so many other mums, is preferable to cow’s milk from ‘very many cows.’

Her story appeared over two pages of The Sun newspaper and hopefully it will be an inspiration to other mums who’ve gone through a similar experience.

Meanwhile, Nikki can’t thank all the mums enough. As The Sun so aptly put it – Bastian is truly thriving thanks to the milk of human kindness…!

Read the full story in The Sun (£)

Do you have a breastfeeding story for a newspaper, magazine or TV? If so do contact me!