This week newspapers and social media have been buzzing with the quite extraordinary photo of the colourful bottom of singer and former X Factor judge Cheryl Cole. 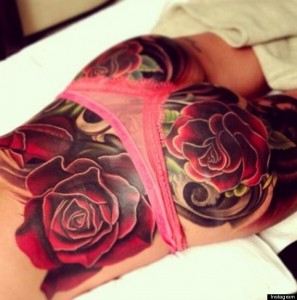 In case you were on the moon her tattoo artist Nikko Hurtado posted the image on his Instagram page on Saturday. It shows that Cheryl has had the most amazing colourful inking on both buttocks stretching down to her thighs and over her lower back.

The general opinion appears to be that the massive tattoo – which apparently took around 15 hours to complete and features English roses – is perhaps a step too far with Cheryl Cole being forced to defend the backlash saying: “People are entitled to their own opinion. Personally I’ve never really concerned myself with other people’s body parts!

“I’ve had it for seven-eight months but only just had it detailed. I can pretty much say I’m now done.”

But while getting such a massive tattoo has given Cheryl Cole some extra publicity, does it follow that for the average person a tattoo might help them become famous as well? After all, you only have to think of David Beckham and all his many tattoos up his arms and over his back to see that large tattoos have become increasingly popular.

Alas in the media world, while tattoos are more acceptable than they once were, they can still be a problem when selling a story.

At Featureworld we are obviously keen to sell someone’s story to gain them the very best price and coverage.

But the truth is, while a good story will always sell, unless the story is actually about your gigantic tattoo (ie there was recently a story about a man who has had every inch of his body inked) some editors of some publications will never feature someone in their pages with a tattoo showing. So if interviewees present with a very large tattoo, especially one that isn’t easily covered with clothes, the market for their story might be limited.

There are various reasons for this.  People often tend to have strong views about tattoos – either they love them or they hate them. And no editor wants the story overshadowed by comments about an interviewee’s tattoo.

But the problem for the publicist selling the story is that tattoos are very personal to someone and for us the hardest thing – when we really aren’t bothered if someone has a tattoo or not – is to tell them to cover it up for a photo or to allow it to be airbrushed out.

However, giving this sort of advice is necessary as it can mean selling someone’s story or not.

So – if you forgive the pun – the bottom line is that while a giant tattoo might not stop the likes of celebrities such as David Beckham and Cheryl Cole from appearing in any paper – the same cannot be said for the ordinary person selling their story.

That said, judging by the barrage of criticism over her tattooed bottom, such a massive inking probably hasn’t done a lot of good for Cheryl Cole’s image either.