Madeleine McCann might have disappeared six years ago but that doesn’t stop any development in this puzzling case becoming front page news – or millions of viewers tuning into a BBC Crimewatch to see a reconstruction of that night when she went missing. 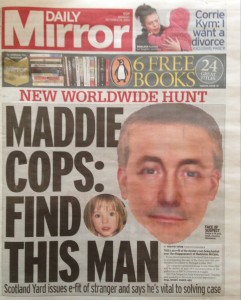 If you asked me to do a photofit of the owner at our holiday apartment this summer – and he popped in several times in daylight to check all was well and have a friendly chat – I couldn’t now begin to describe what he looked like.

Yet astonishingly, although so much time has passed photofits have now been issued of a German or Dutch speaking man Police want to interview.

However, the fact is the story holds just as much public interest as it did that day in May 2007 when according to her parents, while they were having a meal a short way from her apartment, she was snatched by an intruder from her bed.

So what is it about Madeleine McCann and her parents Kate and Gerry that intrigues so many of us?

Firstly, the McCanns – both doctors – are not on the face of it of ‘neglectful’ parents. Certainly, they seemed loving parents who could have been anyone of us, simply enjoying a holiday with friends and our children. Despite the nightmare, Kate is always beautifully turned out and the couple are well spoken and intelligent. In fact the pair exude respectability.

Then there is the ‘unspoken’ issue of what would you have done as a parent? I say ‘unspoken’ because the rights and wrongs of this don’t seem to have been debated much by Kate and Gerry. But, put bluntly, would you have left your children alone without a babysitter in the apartment while you went out to eat as they did?

When this happened I was contacted by a national newspaper and asked if I would write a personal piece about how I had left my children in some similar situation. The paper wanted an article so other parents could relate to the McCanns and see how this could happen to any of us. After all, by any accounts the McCanns were regularly checking their children were fine and were in a Tapas bar which was on the grounds of the holiday complex in Portugal. Haven’t we all just left our children in a room in a hotel, while we sat downstairs and had a drink – with one parent nipping up the stairs to check the kids were all right?

But racking my brains,  my husband and I either took our three kids with us or used to sit on our apartment balconies reading books while they slept when we went abroad. So I couldn’t write the article.

However, the ‘would you or wouldn’t you leave your kids’ issue has surely been a topic of debate at many dinner parties. Indeed the top comment on the Daily Mail website today, over six years on, still reads: “But if they hadn’t left their children unattended then none of this would have happened.”

And then Madeleine McCann seemingly just vanished into thin air. Kate and Gerry McCann have since fought gossip and accusations that they had something to do with their daughter’s death.  Reports have asked, why did the abductor – if Madeleine was indeed abducted and didn’t simply wander off, which is another possibility – not take the McCann twins as well? Why didn’t Madeleine scream when she was taken and if she did, why in such a quiet resort did no-one hear? Why did Kate McCann apparently cry out ‘they’ve taken her’ when she discovered her daughter was missing, rather than think her daughter might just be looking for her in the resort? They are questions that, say some critics, remain unanswered. Indeed Chief Inspector Tavares de Almeida is reported as saying: “The conclusion… was that the McCann couple simulated the abduction to hide the fact that they had not taken care of their children.

“There was a tragic accident in the apartment that night and they neglected the care of their children. It was the conclusion of both the Portuguese and British Police. We have always spoken of a tragic accidental death. There was no murder. The McCanns did not kill her but concealed the body.”

Were this account true however, it is hard to comprehend why the couple all these years later would continue to fight so publicly and so hard to find their daughter.

And how they have coped with such dignity is part of the fascination for many. How as a parent would you cope if such a nightmare happened to you?  And all credit to the McCanns for managing, despite the gossip and the pressure which would surely test even the strongest of marriages, to hold it together.

Which leaves us with the question that all good thrillers, dramas and detective films hinge on – who did it and why?

Of course it could be in the future some grim discovery sheds light on this terrible tragedy. It could even be – as has happened recently in the US where a number of kidnapped girls were found years later – that Madeleine is somehow discovered alive and well. In fact, as recent stories have shown this is a real possibility and undoubtedly why the British police have reopened the case.

Whatever happens, one thing is for sure – the case of Madeleine McCann is set to run and run. Even if the Police’s new concerted efforts fail to create a breakthrough, there will still be sightings of Madeleine McCann, artist’s impressions as she might look as she grows older. Undoubtedly more books will be written and every development, however tiny and insignificant, will be set to be reported on the front pages of national newspapers, magazines and on TV throughout the world.

Some people have criticised the amount of money spent on reopening this case and trying to unearth the truth, asking why more isn’t spent on trying to find other missing children.

But the truth is that few much loved children go missing on a happy family holiday in the middle of what appeared to be a safe resort.  And despite everything thrown at them, the McCanns are extremely determined to find out the truth themselves – and have never given up driving their campaign.

What might have happened to Madeleine McCann preys on any parent’s deepest fears. It is an on-going real life drama, a storyline that is proving much more compelling than any fiction.