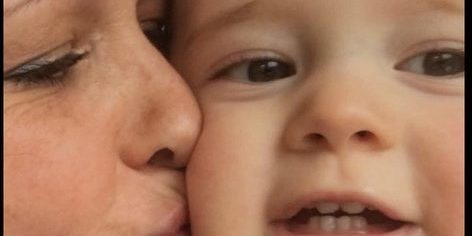 Ultrasound scan got gender of my baby WRONG! Story in Take a Break

Annie Lightfoot contacted Featureworld after an ultrasound scan predicted a girl – and she had a boy! It was quite a shock – Annie had bought lots of pink clothes and even held a pink baby shower for the daughter she thought she was having. I placed her story in the Daily Mail where many people commented they too had had a similar experience.

Since then Annie’s story has appeared in Take a Break mag. Grab a cuppa and read it here… 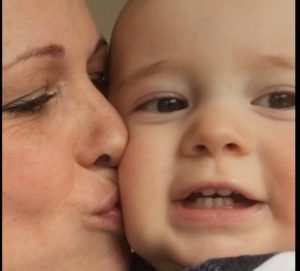 Like many parents to be when Annie Lightfoot, 36, from Doncaster, had a an ultrasound scan, she decided to find out the sex of her unborn baby. But life was to take a very unexpected twist…

Standing in my mum Jenny’s kitchen I pulled up my top and showed her my bloated tummy.

A few months earlier I’d had exploratory surgery for painful periods and I’d been diagnosed with irritable bowel syndrome.

“I’ve been up all night worrying something’s seriously wrong,” I said.

She looked concerned. “Maybe it’s an intolerance to gluton or something you ate?”

The next day I went to see my GP.

She ran a hand over my tummy. “You don’t think you could be pregnant?”

I shook my head.

My ex boyfriend, Jay and I had broken up over four months ago. Before that we’d tried for a baby for six months – but nothing had happened.

I was in my 30s and felt time to conceive was running out. But my GP thought my painful periods could be down to a condition called endometriosis where the lining of the uterus builds up in the wrong places inside.

Shortly after Jay and I broke up and I moved out. 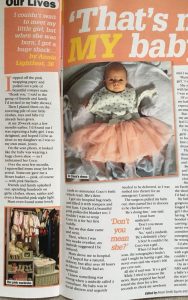 The story went over two pages of Take a Break mag …

So a pregnancy couldn’t be possible.

But the doctor did a pregnancy test anyway. Incredibly it was positive.

“You need to have a scan,” she said, “I’ll book you in.” My head was reeling. Part of me was excited to be pregnant at last. But at the same time I felt worried about being a single mum.

The next day I lay on a bed while the sonographer scanned me.

“Oh, you’re about 20 weeks pregnant,” she said, turning the screen to face me.

I couldn’t believe it! There, kicking away was a baby. Not IBS –  and despite my suspected endometriosis, there was a baby. I was definitely pregnant. I felt suddenly thrilled.

The baby was healthy. I breathed a sigh of relief.

“Do you want to know the baby’s sex?” she asked.

I looked at the scan. “I already think I know…” I replied. I’d always imagined myself with a little girl. Now as I faced bringing up a baby on my own, it felt even more likely to be a daughter. I hoped we’d have a great relationship, as I did with my own mum. Plus dressing her in beautiful clothes, shopping…

Now I was eager to find out if my gut feeling that I was having a baby girl was right.

“It’s a girl!” said the sonographer.

She printed off a grainy photo of the scan. It looked as if she had a huge clown shoe on her foot, so from then on I called her Coco – after Coco the Clown.

I couldn’t wait to tell mum the good news.

As soon as I got out I facetimed her. “Mum I’m pregnant,” I said, followed by, “And it’s a little girl!” 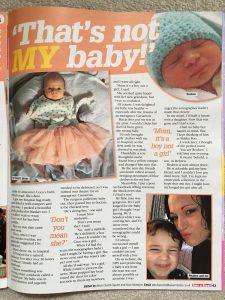 Ultrasound got sex of baby wrong

I knew mum would be as thrilled about me having a girl as I was. As she said, my baby daughter would one day replace the special bond we shared together when she wouldn’t be around.

We agreed she would be present at the birth and began planning.

A few weeks later I announced my baby’s sex to friends and the rest of the family when I held a baby shower for Coco. Everything was pink. Pink cup cakes, pink fizz, pink gift bags with pink sweets, even pink decorations.

The theme was Coco Chanel. I even had a personalised book in Coco’s name.

Everyone bought presents of pink dresses and those who had daughters gave me hand-me-down babygros.

Over the next few months I squirrelled items away for the arrival of Coco. Someone gave me a Moses basket – pink of course with pink blankets.

And I couldn’t help but splash out on some items myself, spending hundreds of pounds on pink clothes, shoes, pink rattles and even a beautiful pink nightlight.

Mum even found some beautiful cards to announce Coco’s birth with ‘She’s here’ on them.

Two weeks past my due date and I was desperate to meet my baby daughter. So when on Valentine’s Day the hospital suggested I be induced I readily agreed.

I’d hoped for a natural delivery but after over 30 hours in labour I finally had an epidural.

I knew something was wrong when a midwife called a consultant.

My baby was in fetal distress and she urgently needed to be delivered. I was rushed past my worried mum into theatre for an emergency C –section.

As the baby came out, a doctors said: “He’s doing just fine.”

A boy. It couldn’t be. When I had the ultrasound scan the sonographer never said, ‘most probably a girl,’ ‘maybe’ or ‘possibly a girl’ or ‘this isn’t 100 per cent.’

A midwife had told mum I’d had the baby. She popped her head round the door to check we were all right.

“Mum it’s a boy, not a girl,” I said. She seemed quite happy but I was so confused.

Although we still weren’t back together Jay was at the birth of his son. His SON.

As he marvelled at our baby boy who was wearing a little blue woolly hat, Jay was clearly already besotted.

And of course I was just delighted my baby was fine – especially after my emergency c section. But… as they put him in my arms I couldn’t help but feel I’d been handed the wrong baby.

A very thoughtful nurse dressed him in a yellow babygro borrowed from the hospital.

Meanwhile I put an announcement on Facebook telling everyone the shock news that I’d had a bonny baby BOY!

My baby boy was gorgeous. Yet I had to grieve for Coco the baby I’d never had. On its Choices website the NHS says predicting a baby’s sex from the scan is not always possible or accurate. I now believe the huge clown shoe I saw on the scan was my baby’s knee, which was hiding his gender. I felt angry that the sonographer had not made it clearer she could be wrong.

In my mind I’d built up a future with a daughter. Now that was gone and I had a son.

I had no baby boy names. But I kept thinking of him as ‘bubba roo’.

A week later I thought of the perfect name.

Reuben is now almost three. He is absolutely adorable, my best friend and I couldn’t love any child more.

But I am not sure I will ever get over not having Coco. To this day I have kept items of clothes I bought for her and was given in the hope I will one day have a little girl.”

Do you have a story suitable for publication in a magazine or newspaper or both? All copy is read back prior to publication so you can be sure you will like it – and there is always a thank you fee! Contact me in confidence to find out more >>>

Category: Stories sold in 2018, Stories sold to a magazine, Take a Break storiesBy Alison Smith-SquireJuly 30, 2018
Tags: Baby stories
Share this post
Share with FacebookShare with TwitterShare with PinterestShare with LinkedInShare with WhatsApp