Every so often a story crops up in the press, which everyone – no matter what their age – has heard about and is talking about. 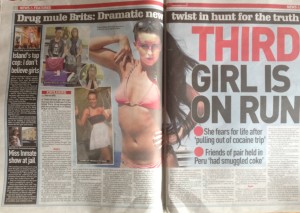 The Sunday People analyses the evidence…

So this week not only has my husband said, ‘Do you think those girls in Peru are innocent or not’ but my parents in their 70s have also brought the subject up, as have all my three children, aged in their twenties.

And we aren’t the only family fascinated by the story of Melissa Reid and Michaella McCollum Connolly, currently languishing in a police cell in Peru after being caught with cocaine worth £1.5million as they waited to board a flight out of the South American country.

Their plight has dominated not only every national newspaper but also TV bulletins for the past week.

If convicted they could face up to 25 years Santa Monica prison, a tough all-woman jail. This place is apparently bursting with drug traffickers, pickpockets, robbers and other violent offenders. Overcrowded and filthy, the prison has a fearsome reputation with reports of torture and degrading treatment by guards. At the very least if they co-operate with police, they are likely to get two years – but many reports claim just to get a case to trial can take three years.

The girls, aged 20, claim they were drug mules forced at gunpoint to smuggle the cocaine. Others say they knew what they were doing and are likely to have smuggled the drugs for payment.

The outcome remains to be seen. But what isn’t in doubt is the interest the public has in their story.

Firstly – and most importantly – this is one of those unusual stories that a wide variety of people of different ages can relate to. These are ordinary British girls who seemingly – as thousands of girls their age do – went on a harmless working holiday trip to Ibiza. They could easily be your daughter or grand daughter or your friend. And the story has come slap-bang in the middle of the holiday season.

If you are a parent, that middle-of-the-night phone call from your newly adult child, is the most feared. Any parent will be able to relate to the nightmare these girls’ parents will surely be going through knowing their daughters are mixed up in something like this – and in fact feeling helpless to act.

Likewise any doting grandparent can imagine how they were feel if this were happening to one of their own family.

Then, anyone in their late teens or twenties will also relate to this story. How would you cope at that age – when you are on the cusp of your adult life – with potentially going to prison until you are middle aged? If these girls got such a sentence at such a young age, it would undoubtedly take out a whole chunk of their lives – meaning no career, no marriage and no children.

And then there is the wondering – are they innocent or not? What would you do if you were kidnapped, as they say they were, and told to smuggle drugs for your life? Would you report it as it was happening?

The reports of this story have unearthed a whole world that had previously been hidden. Few of us go to Peru for our annual holidays and then even fewer realised it was such a big player in the cocaine industry.

No-one really knows how justice is meted out in Peru.  There is a legal system but there’s no clear reports about how that works – or how many years they can expect in prison if convicted (it ranges from two to 25 years.)

Whatever, it is a story that goes to show how a real-life story can prove much stronger – and more compelling – than any fiction. After all, were it to be a storyline on Eastenders or Coronation St, it might have been considered far-fetched. Yet, here it is – complete with regular photo updates of the girls in the police station – being played out in in our daily newspapers.

Certainly – whatever the outcome – these girls’ lives and their family’s lives will have been inextricably changed. And it is also a story that will undoubtedly be rearing its head in our daily newspapers and news websites for a long time to come.

Have you been locked up abroad – when perhaps you were innocent? To tell your story contact us using the form to the right of this page>>>