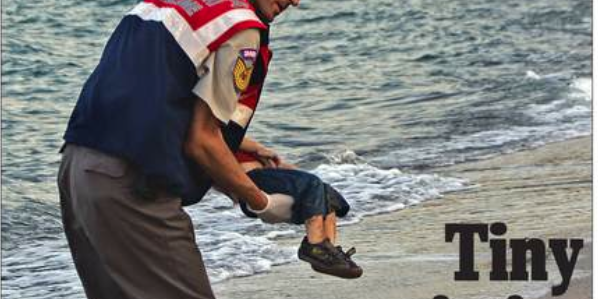 Why was the photo of Syrian child Aylan Kurdi so powerful? 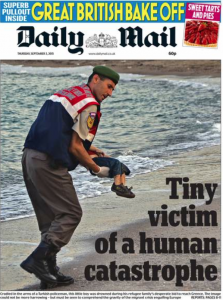 Sadly, these days it’s not uncommon for all of us to see shocking photos of dead children in the media. But what was it about this particular photo showing the lifeless body of tiny refugee Aylan Kurdi in a rescuer’s arms that propelled it to the front page of the media all over the world?

Taken by photographer Nilufer Demir, 29, who works for the Dogan News Agency based in the Turkish coastal resort of Bodrum, the amazing photo has done more to demonstrate this human tragedy than any words ever can.

I believe the main reason is so many people can relate to this photo. This could so easily be your own son, your grandson, your brother.

This is a little boy who was obviously loved. On his tiny dangling feet are velcro tie shoes – presumably because they are easier for a three-year-old to fasten. Aylan, wearing a little red T shirt and green shorts, is a child who was clearly lovingly clothed by a parent.

Someone – probably his mother, who also perished – chose those smart clothes and one morning helped little Aylan into them. No doubt as all mums do, she looked at him proudly as she readied him and his brother for their big adventure attempting to cross the Aegean Sea to Greece.

And then what Aylan is not wearing is also shocking. There is no life vest.

The strangely calm photo (the fact it was not bloody is why it could also be shown in family newspapers) begs the question – just how desperate was Aylan’s family? This is the question that has played on many peoples’ minds.

Undoubtedly the photo has changed the way many people view refugees – because it brings the reality to us that this about real people, just like any one of us, and their struggle – which particularly any parent can relate to – for a better life.

Photographer Nilufer Demir has now told how she wanted to capture the ‘scream’ of the three year old’s ‘silent body.’

Press Gazette reports on an interview with CNN when Nilufer told the broadcaster: “I thought the only thing for me to do was take their photographs to make sure Turkey and the world sees this… I thought, ‘This is the only way I can express the scream of his silent body.'”

I have reported before on how powerful photos can be.  But you do not have to be a professional photographer to take an amazing photo. I have also sold front page photos where a member of the public happened to be in the right place at the right time.

Have you taken an incredible photograph? Contact me for free advice about selling your photo to the media.