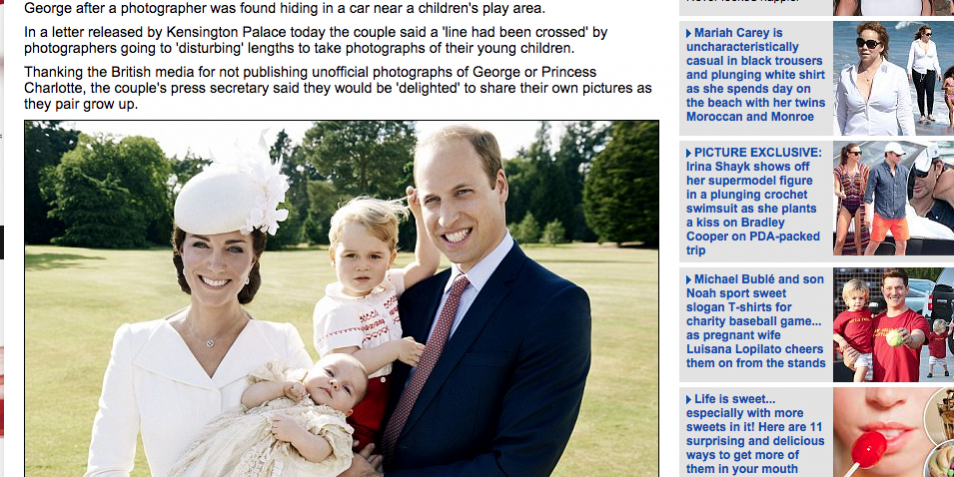 Kate and William – and why unofficial photos of them are worthless…

As the Palace complains about press intrusion, a publicist’s view on a disastrous PR move. 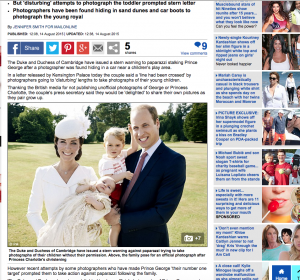 Mail Online with an approved photo of the Royals.

As the Duke and Duchess of Cambridge issue a stern warning to ‘stalking media’ to stay away from their children, Prince George and Princess Charlotte, I can imagine the general public finding this letter to UK press editors baffling – something that has come totally out of the blue.

After all, this publicly funded couple, who live a life of luxury that the vast majority of us could not even begin to imagine, seem to live increasingly private lives. I cannot remember when I last saw a photo of the family together and in fact I am struggling to recall when I have seen any of them as they do not appear to do that many public engagements.

But one reason UK residents see so few photos of them is because quite simply, unofficial photos of them that have not been approved by the Palace are not saleable in this country. No UK publication will dare to print them and they never have.

Indeed I cannot imagine any UK national newspaper editor allowing their reporter to write a piece as I am doing like this. Because if they did, it would be ‘orf with their head’ in that the rogue paper could be banished by the Palace. Their journalists and photographers might not even be invited to report on official functions. They would then risk being the only publication in the UK without those valuable pix of the royal family.

And that would be disastrous – because whether the royal family interest you or not – they (especially the Duke and Duchess of Cambridge and their kids) do sell newspapers and get those valuable clicks on websites.

Needless to say even as an agent selling stories all around the world, if someone came to me to sell a lovely photo of George playing in a public park for example, I wouldn’t touch it. Why? Because the last time a photographer tried to sell a photo like that – an innocent and rather charming photo – he was threatened with legal action.

And, quite apart from the fact that no UK publication would dare to even buy them, as a UK based agent, the risk of ramifications for my business would still be too great frankly.

That said, there are a handful of publications all over the world which will pay well for such photos. Hence the Duke and Duchess of Cambridge have now released a letter to all the media. It relates how foreign paparazzi press have been hiding in car boots and behind sand dunes with long lens camera to snap a photo of the young Royals.

And now William and Kate are worried for their kids’ safety and in a letter penned by Jason Knauf, Communications Secretary at Kensington Palace, are telling these photographers to stay away.

As a mother of three myself, I can certainly understand the worries of the Duke and Duchess of Cambridge.  Even royal children must grow up with some sense of normality – and be able to play in a park without the prying eyes of a furtive photographer. Nothing is more important than the safety of your children and nothing could be more worrying than the thought some madman might be stalking them.

However I am afraid the Palace press office must shoulder some blame for their plight. For a start, why write a letter like this? The UK media cannot control the likes of an unknown freelance foreign pap who hides behind a tree in a public park hoping to get a snap of Prince George. Already the British media do not print these photos –  they are not something they consider buying – what else can they possibly do?

Then the Palace has said they will be releasing images of the family as they grow up – but continually fail to do so.

The problem is the Duke and Duchess of Cambridge are not a normal family. They are our royals and with that job, comes lots of bonuses – no money worries for a start, top medical care, amazing travel, clothes, living in a wonderful home – to name just a few.

But if the Palace set up an Instagram account where they released photos of this royal family and sometimes put on some charming normal family pix of the children taken by their parents – George eating an ice cream, Charlotte in her pushchair and so on – then the market abroad for these photos would lessen.

This sort of PR would also go a long way to helping the public bond more with the royal family. Right now – and don’t forget comments are heavily moderated on this story on national newspaper websites for fear of upsetting the royals – many hard working ordinary people are feeling rather resentful at just how little William and Kate bother to connect with the rest of us.

Unfortunately the reality is that even when Princess Charlotte was born, William couldn’t wait to get his family away from the world’s media.  Of course he has his reasons and it is clear that he really does hate the press. But I cannot see how writing such a nasty letter to UK papers as well, who meekly do their bidding anyway, is good publicity for the royal family.

I am afraid dealing with the press successfully with a stiff upper lip (rather than continually bleating about them) comes hand in hand with being a royal. For all those very many royal privileges, funded by the tax payer, comes the duty of being seen and doing one’s public duty. I am afraid that does mean, rather than retreating into your castle and drawing up the drawbridge, putting your family in the spotlight more than just very occasionally.

If Kate and William cannot face doing this – and I wouldn’t blame them if they felt they could not – then maybe they should simply consider stepping down from their amazingly blessed royal lives to live a more normal life out of the spotlight.

Read the extraordinary letter in the Daily Mail.

If you have a photo to sell about the Duke and Duchess of Cambridge, Prince George or Princess Charlotte do not contact Featureworld. If, however, you have a story to sell about anything else, I am happy to give you free and confidential advice.