Astonishing allegations that Nigella Lawson was a ‘habitual criminal’ who took cocaine every day of her life for the past decade – and her own admission that she has taken cocaine at some points in her life – have shocked the nation. 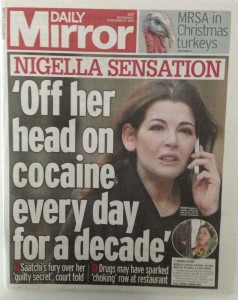 After all with her curvy good looks and love of wholesome home cooking, Nigella, a ‘cooking national treasure’ who looks younger than her 53 years, hardly looks like a cocaine addict.

But she was unable to stop the claims – made by two PAs who worked for her as they were accused of spending £685,000 on company credit cards – from being published because these are not ‘claims’ made in a newspaper but made in court.

Because they were said in court – therefore legally privileged – she can’t sue for defamation of character as she could do if they had been said by her husband or someone else in a newspaper (and for that reason these sort of allegations are rarely printed in papers.) And as what was said in court is said in public and can legally be reported, there was nothing anyone could do to stop them being reported.

The big question, however, is whether or not there is any truth in the allegations, is can the publicly much loved Nigella overcome the drugs scandal that has stunned everyone? Or could this court case have damaged her credibility as a ‘domestic goddess’ forever?

Apart from standing up in court and denying that she is a ‘habitual user’ – albeit she has used drugs in her past during particularly stressful periods in her life – Nigella has so far responded by tweeting homely recipes on Twitter.

But how – especially as her employees were found not guilty of fraud allegations, therefore implying the jury believed her employees more than Nigella  – could this affect her career?

How this pans out is whether her TV persona is robust enough to stand them – and also whether or not advertisers and broadcasters shy away from being linked with someone who admits she has taken cocaine and cannabis in the past.

Right now it appears TV companies are standing by the chef. As an advert airs in the US to promote her show, The Taste, a statement from broadcaster ABC says the series will air as planned on January 2nd.

Channel 4 has also told MailOnline it will be going ahead with its plans to broadcast the 10-part UK version of The Taste in early 2014 regardless of the allegations.

One important aspect to remember is Nigella Lawson was never charged with any criminal offence herself. It is not as if she were appearing in court herself to answer a charge of drug taking.

Thanks to the internet, news goes in one minute and is out the next – and the public really doesn’t have a long memory. So it is quite likely by January all of this will be in the past and she will return to our TV screens without any problem.

Nevertheless, according to sources quoted in the New York Daily News ABC admits that it is still ‘debating’ whether or not to have Nigella back for a second show, fuelling speculation it wants to see what happens in the next few weeks before committing itself.

And, while there is no suggestion of this right now, if advertisers become concerned about being linked with her brand because of the allegations, and indeed by her own admissions that she has taken drugs, then her wholesome image could be tarnished forever.