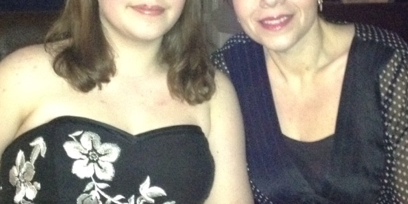 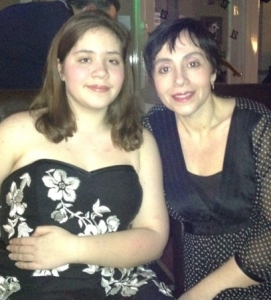 Following their mum and daughter two sides story in the Daily Mail and Anna’s weightloss story in The Sun, I was delighted to gain Anna and Emily Furniss further publicity in a top women’s magazine.

Having appeared over a double page in That’s Life magazine, I was delighted to gain the pair yet another spread in Woman magazine.

Woman ran their story over two pages – and as you can see, it looked amazing!

Anna and Emily first came to sell a story through Featureworld two years ago. Then mum Anna told how she’d slimmed through a gastric surgery op. She was saving up for Emily, who took after her and battled with her weight too, to undergo the same op when she turned 18.

But as she turned 18, Emily had other ideas. Having seen her mum go through the surgery, and suffer from a number of side effects, she decided a similar op wasn’t for her. 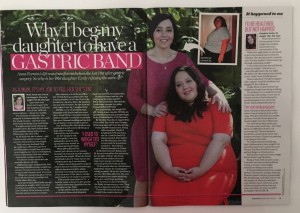 Anna and Emily Furniss in Woman…

Anna was understandably disappointed because she believed the op had done more than just save her life – she’d been suffering from a number of weight-related health issues – but it had transformed her life as well.

For example, she’d gone for promotion at work, ending up the deputy manager of a bank. That was something she felt when she was overweight, she’d never have had the confidence to do.

But Emily said being overweight wasn’t affecting her life in the same way. She is happily training to be a midwife, has lots of friends, a good social life and is in a relationship.

She also felt such an operation would be risky. And would rather lose weight the natural way – through exercise and dieting.

At Featureworld you can read a whole page dedicated to selling weight loss stories to magazines and newspapers.

Meanwhile to see if you have a story to sell, contact me using the form to the right of this page>>>

Category: Stories sold in 2014, Stories sold to a magazine, Woman magazine storiesBy Alison Smith-SquireNovember 28, 2014
Tags: Weightloss
Share this post
Share with FacebookShare with TwitterShare with PinterestShare with LinkedInShare with WhatsApp