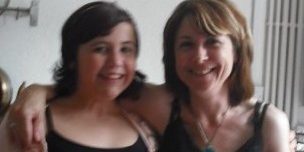 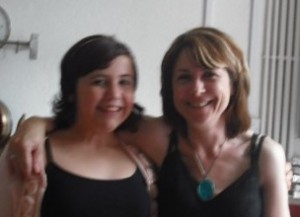 As parents we all like to believe that if our son or daughter were to suffer from an eating disorder, we would notice first – or that our child would come to us for help.

But in fact as mum of four Karen Walker discovered, however much we think we know our children, there will be things they do keep from us.

So Karen was horrified when she received a phone call from daughter Ruth’s school from a teacher saying they believed Ruth was self harming and had lost weight.

It turned out that Ruth, 15, had been on a ‘healthy eating diet’.  Karen, who had been busy building up a career, had recently remarried and the whole family had moved to a new area. Meanwhile Ruth had started at a new school. Ruth felt her life was out of her control and she was heading for an eating disorder.

But what makes Karen’s story all the more poignant is that as a teenager she suffered from anorexia herself. Ironically, she then went on to qualify as a clinical psychologist specialising in eating disorders. So Karen believes that of all people, she should have noticed the signs and of course she blames herself – as all mums do! 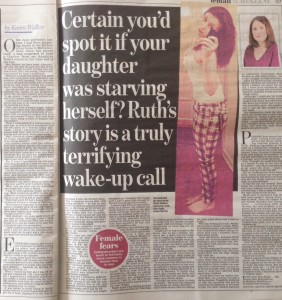 Karen and Ruth’s story in the Daily Mail.

However, as she herself admits from her own experience – and from counselling other families – people with an eating disorder can be extremely clever at hiding all the evidence.

Luckily a year on from that terrible day that Karen received that call, Ruth has now received counselling from a psychologist – it has been hard for Karen not to interfere – and is a much healthier weight. She is settled at her new school and much happier.

In fact, it is testament to how much better Ruth is that she decided to take part in this feature for the Daily Mail with her mum. Both of them believe that it’s important for other parents and young adults to be aware of these issues – and it is only by talking about them openly like they have that they can be overcome.

Karen says: “Ruth and I were very happy with our positive story in the Daily Mail and received many lovely comments from friends and family. We both believe being open is the way forward. If this helps just one person or family going through a similar ordeal, it will have been worth it.”

Karen and Ruth have jointly decided to do another feature together and we have now placed their story with a big national women’s magazine.

Meanwhile, Karen’s husband has written a book addressing some of the issues. 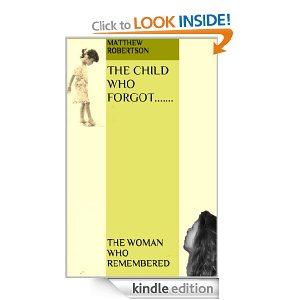 The Child who Forgot … the Woman who remembered by Matthew Robertson is available from Amazon.

And you can read the whole of Karen’s article in the Daily Mail here.

If you are a mum and daughter or sisters who would like to do a feature together on eating disorders or any relationship issue, then contact us using the form to the right of this page >>>