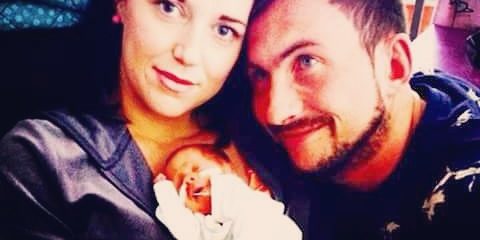 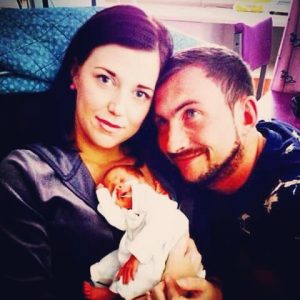 Chantelle with her family

After almost dying when she was 17 from kidney failure, Chantelle McLeod had a donated kidney

Docs said she’d never had kids. And when she got pregnant by accident risks were so great she was offered an abortion

She turned it down and her baby daughter was born early.

However, Chantelle almost died as her donated kidney failed

Now has dialysis three days a week and is often tired

But says baby daughter Orla-May was worth it

Chantelle, 30, first had a kidney transplant when aged 17 she suddenly became ill and was given 12 hours to live.

Her mum offered to donate but a transplant from a three year old girl who’d died came up quicker – and with a new donated kidney Chantelle lived life to the full.

Sadly she was told by doctors due to the kidney failure she would not be able to have a baby or even get pregnant.

However, after being with her boyfriend of three years she began suffering from morning sickness. Incredibly she had got pregnant. It felt like a miracle and she was thrilled. But doctors were not so happy as they said having a baby with one donated kidney could kill her – in addition her baby was unlikely to go full term. The risks were so great that Chantelle was offered an abortion.

She and her boyfriend turned it down – she always longed to be a mum and whatever the risks, she accepted them.

At 24 weeks she was rushed to hospital with life threatening pre eclampsia and at 30 weeks daughter Orla-May Rose was born. She weighed just 2Ib 11oz and was so tiny she was kept warm in a sandwich bag.

Thankfully after some time in special care Orla-May thrived and two weeks later, Chantelle brought her home. But Chantelle has paid a heavy price for becoming a mum.  Within hours of bringing Orla-May home her donated kidney failed. Since her daughter was born in August 2014 Chantelle undergone gruelling dialysis Monday, Wednesday and Friday for four hours a time. If she doesn’t go she will die within a week.

Chantelle’s mum is now being tested to see if she can donate a kidney to her daughter – but if not, Chantelle faces years on dialysis waiting for a donor. It means she is often tired and not able to run around with her daughter as another mum would do.

Yet she has no regrets. She adores her daughter and just feels so lucky to have her.

I placed Chantelle’s inspirational story in Real People mag where it appeared over two pages!

After her story was printed, Chantelle said: “I’ve had positive messages all day about my story… I’m gonna frame it!”

Real life story about organ donation to sell? Contact me for free, confidential and independent advice about selling a story to the media >>>

Category: sell my story to Real People, Stories sold in 2017, Stories sold to a magazineBy Alison Smith-SquireApril 18, 2017
Share this post
Share with FacebookShare with TwitterShare with PinterestShare with LinkedInShare with WhatsApp