Sell your story to the press for Justice

… and gain worldwide publicity for your story.

Sometimes the only way to gain justice is through worldwide exposure in the national press. As a journalist who always puts interviewees first, I will work with you to ensure you gain the maximum worldwide publicity for your story.

In these cases it isn’t necessarily a matter of selling a story for the most cash. It is more important that your story is printed in the national press, which will gain you the most publicity. However, money for your story is still of utmost importance as raising money can help you in your fight for justice.

Other people want to tell their story to warn others. Again, selling your story for money often isn’t the top priority but of course it is always helpful – after all, you might want to sell your story for justice to enable you to pay for legal fees, a website or leaflets.

Featureworld is able to organise press coverage immediately throughout the UK and worldwide. Email me, Alison Smith-Squire, to find out more here alison@featureworld.co.uk

Justice for Jim: Hauled to the Police station for cutting down brambles … story in the DAILY MAIL 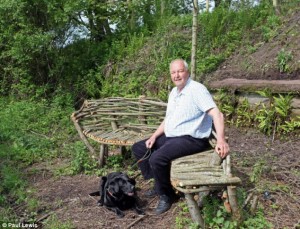 Pensioner Jim Higgins wasn’t sleeping when he contacted Featureworld. The granddad had taken it upon himself to tidy a footpath at the bottom of his garden, cutting down brambles and installing a fence.

But although he received much thanks from his neighbours and others in the village where he lives, the owners of the land were furious.

And Jim was called into the local Police station for questioning where he faced being charged with theft of the old fence.

Within hours of Jim contacting Alison, the Daily Mail were at his home to take photos and within 36 hours his story had appeared in the paper.

Villagers were incredibly upset and rallied around Jim. Needless to say following publication of the story he was told by the Police he’d been cleared and they were not taking matters any further.

Jim says: “The night after I spoke with Alison I had the first proper sleep in weeks. I had loads of support from the Daily Mail and their readers which really helped. I am so thankful to everyone for their support and relieved the nightmare is over.”

Wrongly accused? Contact Alison using the form to the right of this page>>>

Justice for cats: Cats Protection charity investigation … story in the MAIL ON SUNDAY 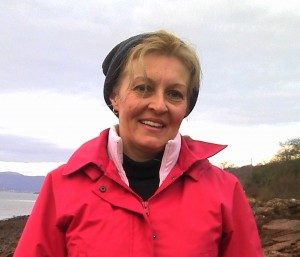 Mary Millar came to Featureworld to gain justice for cats around the UK. Mary believed Cats Protection was not spending the £62million income it gets a year properly.

The former Cats Protection volunteer was upset by the £100K plus salary of its CEO plus other staff salaries when at the same local branches were asked to reduce their costs and spending on cats.

Featureworld took on the investigation and spoke to other volunteers who shared the same concerns.

Mary’s story was printed in the Mail On Sunday newspaper. Cats Protection denied all the allegations. Since the story came out publicly Featureworld has received over twenty emails and phone calls from other people who felt the same way.

Mary says: “I am very pleased that the story was printed and grateful to Alison and the Mail on Sunday newspaper for taking it on.”

If you know of a charity you would like a national newspaper to investigate, contact us in confidence using the form to the right of this page>>>

Justice for Daniel: Wrongly accused of being a thief … story in the SUNDAY PEOPLE 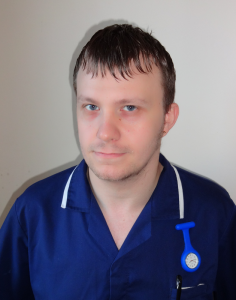 Daniel Dand-Hansis was devastated and furious after being branded a shoplifter on Facebook.

An innocent shopper, he’d simply popped into his local supermarket to buy a few bits and pieces. But a few hours later CCTV photos appeared on the local Police website saying he was wanted in connection with theft.

The Police immediately admitted it was clear Daniel hadn’t stolen anything and they were wrong to upload the footage, with Tesco also apologising, but Daniel wanted his story in a newspaper to clear his name, putting his reputation straight, and his story appeared in the Sunday People newspaper as well as gaining publicity locally.

Daniel said: “I am every happy with the article… many, many thanks once again.”

Justice for the Toomey family: Falsely accused of harming our children… story in the DAILY MAIL 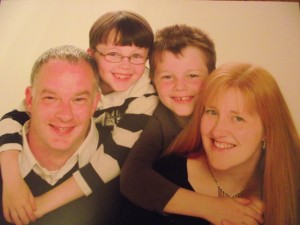 What happens when social services come knocking at your door? Tragically, it is something that happens to thousands of families every year who as a result, stand to lose their children forever.

Undoubtedly there are times when social services should step in and sadly those children may well be better off with a new life and a new family.

But if you are innocent, then your world can be turned upside down – and devastatingly many families find they have nowhere to turn to for help.

As part of an in-depth investigation, Featureworld spoke with three families, including the Toomey family (pictured) who had all been falsely accused of harming their children. Thankfully, for each of them there was a happy ending but the experience was a nightmare none would ever forget…

Read the Featureworld investigation in the Daily Mail

Justice for Bethany: Stepdad secretly filmed me naked – story in The Sun on Sunday… 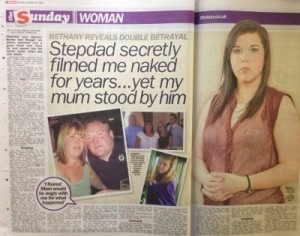 When Bethany Buckle stumbled on some ‘home movies’ on the family computer, she couldn’t recall what they were. Intrigued she clicked on them – to have the shock of her life. For they were series of films of her naked, taken when she was getting changed in her bedroom. Stepdad Michael Connor admitted voyeurism in court – he’d hid pinhead cameras in her room –  but more upsetting, her mum chose to stand by him. Meanwhile after a series of rows with her mum, Bethany was forced to move out. Bethany’s story has previously appeared in CLOSER mag and now appears in THE SUN ON SUNDAY. She has since appeared on ITV THIS MORNING.

Bethany said: “I have been very happy with all of my stories. I wanted to expose my stepdad to warn others and ensure he can’t do something like this ever again.”

Jutice for Reggie: Sued – for having a go… Daily Mail

Reggie Wharton came to Featureworld after he received a solicitor’s letter. 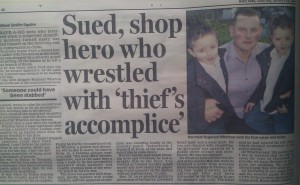 A year ago Reggie was shopping when he helped a security guard stop a suspected shoplifter.

When a second man – who appeared to be an accomplice – appeared and seemed to try to stop the suspected shoplifter from being taken to the back of the store, Reggie stepped in to help.

Fearing the man was about to lash out, he wrestled him to the floor. The store manager thanked Reggie for his help. Although the suspected shoplifter was not charged with shoplifting, he turned out to be a former heroin addict who was carrying two knives.

Reggie believed that was the end of it. But a year later he received a legal letter saying he was being sued by the second man – he claims his elbow was injured and he was innocent.

Reggie’s story was placed in the DAILY MAIL newspaper. He declined payment and following the publicity, the man suing him lost his case.

Reggie says: “Getting my story into a national newspaper was never about money – If I hadn’t stepped in someone might have been knifed. I just felt it was incredible and unjust anyone could sue like this.

“I was very heartened by all the comments that appeared on MailOnline in support of this issue.”

Read Reggie’s story as it appeared in the DAILY MAIL>

Justice for Mark: When Mark was told he was dying from cancer, it was a bombshell… Sunday Mirror

Mark and fiancee Tricia had set their wedding for next year. But then doctors said Mark 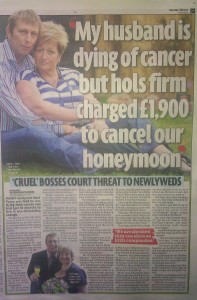 might not even be alive to get married.Reluctantly the couple brought their wedding forward and cancelled their honeymoon in Cancun – citing the reason that Mark might not be alive to go on it – yet incredibly they were billed for  £1285.15 plus £199 ‘admin fee’.

Tricia and Mark wanted to gain justice.  They couldn’t believe a holiday company could show so little compassion, especially as they were giving them nine months notice of cancellation and a doctor’s letter.

Their story appeared in the SUNDAY MIRROR and the DAILY MAIL and after Featureworld approached them, the company waived the cancellation fee.

Incredibly after their story appeared in the newspapers, another holiday company came forward with an offer of a free break in a luxury hotel, Chewton Glen, which Mark and Tricia took up.

Tricia said: “Just thought we would drop you a line to say we have had our break at Chewton Glen, which was absolutely amazing. None of this would have been possible if you hadn’t written that lovely article. Once again, thank you so very much.”

Read how the story appeared in the Sunday Mirror here > 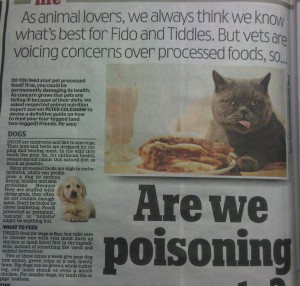 death at a relatively young age because on vet’s advice, she had fed him processed pet food.

I investigated her concerns and found out that many other people also shared her views and were also concerned about processed petfood.

To read the petfood newspaper investigation story, which was printed in the Daily Mail click here>

Fiona said: “Alison …. a fabulous article. I am over the moon with joy at last this has been taken seriously. You are just wonderful and I can never thank you enough.”

Vaccines are killing our pets

Why I weep for these cows –  Vet Matthew Watkinson

Justice for Mark and Kerry: Social Services snatched our baby

When social services claimed Kerry McDougall was too dim to keep her baby, we 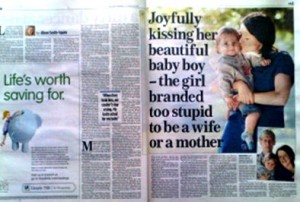 launched a campaign. Over eighteen months, we fought with Kerry, her husband, Mark, and her family to enable her to keep her child. We are delighted to say it worked and today Kerry and her husband are parents of two gorgeous sons.

If you have a story about social services to sell – perhaps you feel you are a victim of unfairness – then contact me using the enquiry form.

Ashleigh came to Featureworld to expose a care home at the centre of abuse. Thanks to 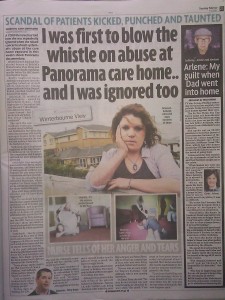 people like Ashleigh, new laws have now been put in place to ensure such terrible treatment of vulnerable people never happens again.

“I just hope telling my story will encourage others to come forward if they ever see such abuse. It is the only way we can ensure nothing like this ever happens again.”

If you have a story you need to sell for justice, do email me personally for advice here: alison@featureworld.co.uk

Connect with Alison Smith-Squire on Google+