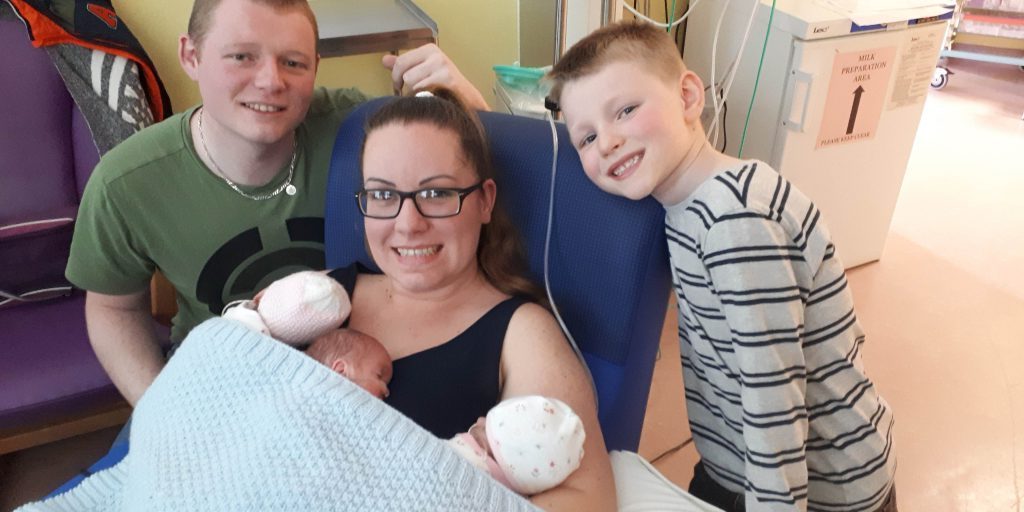 Miracle triplets: Mum who lost a baby during ectopic pregnancy is stunned to be told weeks later she is still pregnant – with triplets … story in the SUNDAY MIRROR 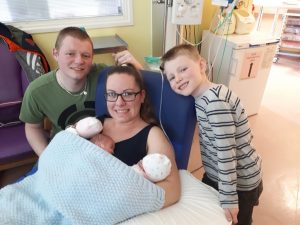 Stacey Fletcher 32,  and partner Damian Taylor were devastated to lose a child to ectopic pregnancy

The three little miracles – two girls and a boy – are now at home having been born at 26 weeks.

A couple who lost their unborn baby due to an ectopic pregnancy were stunned when doctors discovered hidden triplets growing in the womb.

Stacey, 32, and partner Damian were devastated when they lost their baby weeks into the pregnancy. The couple, who have a son, Reece, seven, together, had been trying for a second baby for two years.  Stacey, who had been given the fertility drug Chlomid to help her conceive, had already gone through another ectopic pregnancy just a few months earlier. That time doctors were able to save the fallopian tube by dosing her with a drug to dissolve the pregnancy. This time, however, she had to undergo surgery to have the whole tube removed. 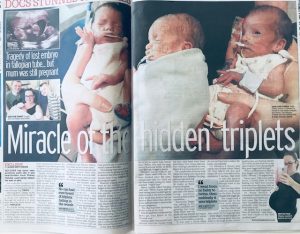 The family in the Sunday Mirror!

But after being sent home to recover, Stacey still felt unwell. Initially she believed her symptoms were due to pregnancy hormones still present in her body. But stunned doctors then discovered she was indeed still pregnant – with twins.

The couple were shocked as were doctors who’d carried out surgery to remove the ectopic pregnancy.

And the biggest shock came at 12 weeks when a routine scan revealed it wasn’t just twins – but triplets.

Damian said: “A heterotopic pregnancy is rare enough. But no doctor has ever heard of any mother having surgery to remove an ectopic pregnancy – while unknowingly carrying triplets. The odds must be a million to one. It is amazing doctors didn’t realise and considering Stacey had an operation under general anaesthetic, extraordinary they have all survived.”

After being born at 26 weeks and overcoming a number of difficulties, Oliver, Megan and Marie, are now safely home with their proud parents and big brother.

Do you have an amazing story for a national newspaper? Contact me for free and friendly advice!

How to sell my story