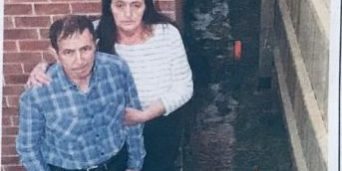 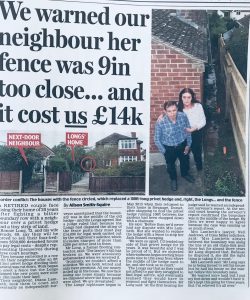 Ronnie in the Daily Mail

Ronnie Long,72, and wife, 60, represented himself and his wife in court

However, despite representing himself, Ronnie and his wife must pay £14,000 court costs for letters sent to them by their neighbour’s lawyer

For 20 years the privet hedge running the length of their garden was Ronnie Long’s pride and joy.

But he and his wife Wendy’s world was turned upside down when they arrived home one day to find the hedge removed by their neighbour.

Their neighbour claimed she wanted to erect a fence to stop her dog escaping – and that the new fence should be erected nine inches to 12 inches inside Ronnie’s property.

Ronnie, 72, and his wife were devastated to lose their beautiful hedge. Worse, they couldn’t afford legal advice.

So when they began getting letters from the neighbour’s solicitors,  Ronnie decided to fight for the strip of garden himself.

After two years of letters, three court appearances – an expert finally decreed the boundary was in the middle of the old privet hedge, and the Longs agreed.

However, they were shocked when the judge ruled they should pay £14,000 legal costs. These included a bill from the neighbour’s solicitor for £217 plus VAT for letters written to Ronnie.

Ronnie and his wife were horrified. All their money is tied up in the £650,000 detached property – they manage on Ronnie\s small state penion. They have already received bailiff’s letter and are set to sell the home they love to settle the bill.