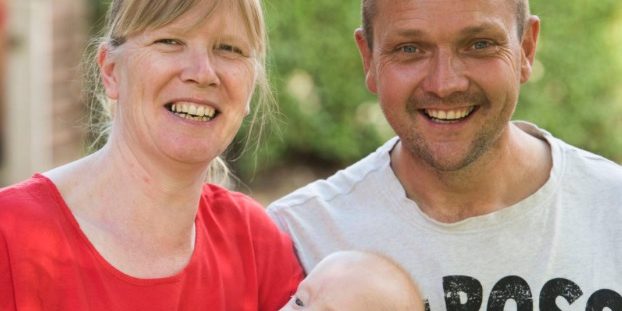 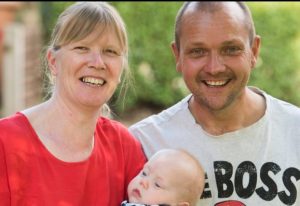 Multi deal for mum of ten Heather! After her story appeared in the Sunday Mirror Featureworld gained her two magazine deals! And her amazing story appeared on the front cover and over two pages of both magazines… That’s Life and most recently Woman’s Own.

Featureworld will sell your story to more publications!  Find out how you can gain more money and publicity for your story by filling in the confidential sell my story form to the right of this page>>>

Meet supermum Heather Esplin.  Astonishingly not only is she a mum of ten children – but every baby was premature.

And in a bid to have her perfect family – five boys and five girls – she almost died.

Yet today Heather – who is thought to have had the most premature babies in the UK – tells how all the heartache was worthwhile.

Heather, 41, who is married to husband Alan, 47, a roofer, said: “I feel the luckiest mum in the world. Every single child was much wanted and planned.

“As they were premature there were some very worrying times. But they are all growing up healthy. When we look at our beautiful family we just feel incredibly proud.” 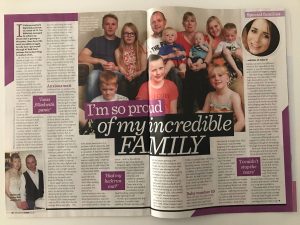 Heather and the family in Woman’s Own

The smallest – Owen – weighed only 2Ib 4oz and was born three months early.

Heather says: “At one point Owen lost almost half his body weight. Doctors gave him only a 50/50 chance of survival and he was in special care for eight weeks. So it was a huge relief when he was finally well enough to come home.”

Meanwhile after giving birth to her ninth baby – Alan who weighed 5Ib 12oz five weeks early – doctors warned Heather another pregnancy was so dangerous it could kill her.

She recalls: “Alan was the only baby I’ve had who didn’t need to go into special care and the only child I was given to hold straight after the birth. Heartbreakingly all of the others were too fragile for me to hold immediately and were whisked into special care. But sadly with Alan I was too ill to enjoy the special moment of holding my baby straight after the birth. I bled so much – my uterus was literally disintegrating – I had to be rushed myself into the High Dependency unit for 48 hours.”

Despite her brush with death Heather, who has had five c-sections, was desperate for one more baby.

She admits: “I didn’t think of the risk. As with my other babies, around six months after my ninth was born I began getting incredibly broody for another baby.

“Alan was very worried about me getting pregnant a tenth time – but I was so keen to be a mum again I didn’t listen.”

However when she delivered her tenth, baby Isaac – born ten weeks early and weighing 3Ib 14oz –she almost died. After developing placenta percreta – a life-threatening condition where the placenta attaches to other pelvic organs through the uterine walls – only emergency surgery to give her a hysterectomy saved her life.

“I lost so much blood that doctors told Alan to expect the worse,” she recalls, “For a few hours as doctors fought to save me, he faced the reality he could be left to bring up ten children as a single dad. I spent three weeks in hospital and it left me unable to have more babies but I will always be grateful to the surgeons for saving my life.”

And the worry didn’t stop there. “A week after coming home, little Isaac was rushed back to hospital with an infection,” says Heather, “luckily he was fine but it was a very worrying time.”

Heather’s journey to have a large family began in when she March 2000 when she began dating Alan, an old friend.

Already a mum to Jolise and Conner from a previous relationship, the couple decided to have two more children together.

“We are both one of three and wanted two children so one didn’t feel the odd one out.”

By the time she and Alan wed in March 2005, Heather was pregnant with Dana, who weighed 3Ib 7oz.

She says:  “Each time the last baby got to around six months both Alan and I decided we wanted another.  Once we got past three children adding a new baby got easier as they always had the older ones to amuse them.”

Eldest daughter Jolise, who now has a daughter, aged two, with her partner no longer lives at home. But the rest of the family share their eight-bedroom semi.

Says Heather: “First we had two more bedrooms built into the loft. Then Alan built an extension to give us a further three bedrooms.

“Although they could have their own bedrooms, the three youngest boys wanted to share so Alan built them a triple bunk.”

Downstairs there is a huge kitchen and conservatory, which has a table to seat 12.  In the lounge there are two large corner sofas so everyone has a seat.

The couple take their brood out in a mini bus and even manage to go on holiday.

“Last year we took eight children to a hotel in Paphos, Cyprus, for a fortnight,” says Heather, “and while it is hard work packing to leave, we also go camping in the UK.”

Budgeting with such a big family is key.

“We limit the amount spent on birthdays at £50 per child,” says Heather, “and we save money all year to give everyone a good Christmas.”

The family’s grocery bill comes in at £220 a week.

She admits: “Feeding so many does take a lot of organisation – and sometimes we have even more as we also have the children’s friends over for tea too or for a sleepover.

“So during the week I begin peeling potatoes as soon as the children are home from school, feeding the younger ones first. Then Conner, Alan and I will sit down together for our evening meal. However at weekends everyone eats at the family table together.

“We do one big supermarket shop and I buy fresh meat in bulk from a local butcher every day. I cook mostly from scratch as it’s cheaper – meals such as lasagne, bolognaise, chicken casseroles, and we also eat a lot of salad.

“I cook in batches and we have a big chest freezer as well as an American fridge freezer so I never run out of food.’

Heather’s day begins at 6am.

She says: “Last thing at night or first thing in the morning I make packed lunches for Alan, Conner and the older children who are at school.

“After walking the younger children to school, I come home to tackle the washing. I do three full loads of washing a day.

“The wear and tear on the washing machine is enormous – my most recent one isn’t yet a year old but it’s already broken down twice under the strain. Although I hang some stuff out on a washing line, most is tumble dried.

“Despite folding as many clothes as possible I still end up doing seven hours of ironing a week.”

Bedtimes are staggered. “This means Alan and I can spend quality time with each child,” she explains.

Her day ends around 10pm when she falls into bed exhausted. “However I will be up at 11.30pm again when Isaac wakes,” she says, “I never have time to watch TV. But Alan recently bought a massive garden hot tub – I love relaxing with the children in that.”

People are often shocked when they discover she is a mum of ten.

“Many find it hard to understand why we have so many children. Recently I was out with the two youngest and a passerby asked me if I just had the two boys. She was speechless when I replied that I have five sons and five daughters.”

“I know how lonely it can be to have a premature baby in special care,” she says, “I find talking to the parents about my experiences really helps others. For example, I managed to breast feed all ten children by expressing milk while they were in hospital.”

Her only sadness is she is unable to have more babies herself.

“Many people seem to think it doesn’t matter as I have ten children,” she says, “but I get a stab in my heart that I will never have another baby kicking away inside my tummy.

“That said I feel lucky to be alive – and so lucky to have such a perfect family.”

Are you a mum of ten or more? Then your story could be worth telling and selling! Contact me for free and confidential advice using the form to the right of this page>>>

Category: sell my story to woman's own, Stories sold in 2017, Stories sold to a magazineBy Alison Smith-SquireMarch 20, 2017
Tags: Baby storiesFertility
Share this post
Share with FacebookShare with TwitterShare with PinterestShare with LinkedInShare with WhatsApp