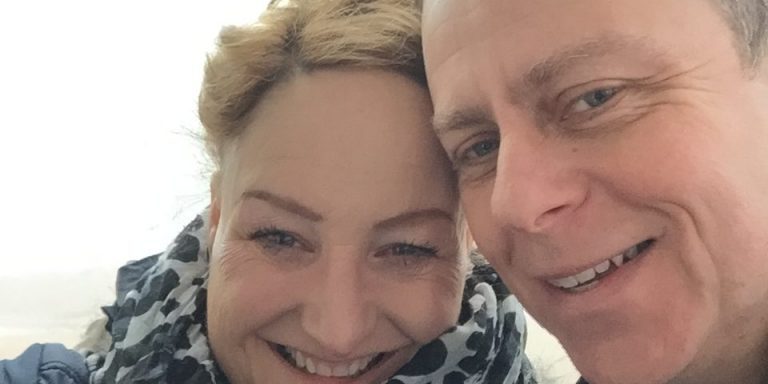 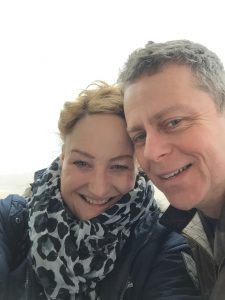 June and her partner

While June Kerr was still slim, her tummy had got larger
Her periods had stopped and she felt exhausted.
June had never had kids but now aged 51 she wondered if she was pregnant
Her partner even called her bump Freddie
However after a cancer scare – tests revealed her bump was a massive fibroid.
At the age of 51 June had finally met Mr Right.
Now although she was still slim, she’d begun putting on weight on her tummy.
Although she’d never got pregnant – she knew from years ago she only had one working ovary – her periods had stopped and she felt constantly tired.
One night partner Simon put his hand on her growing tummy and called it ‘Freddie’.
Could she be pregnant? June began to think it was a distinct possibility. She’d read about women getting pregnant in their 50s and had all the signs.
Eventually other people noticed and June went to the doctors. It was then the doctor burst her pregnancy bubble. She thought it was a malignant tumour.
The bump needed to be removed immediately – June was devastated until she had a scan a week later. There it was discovered the bump was a huge fibroid.
June was hugely relieved it was nothing serious and she and Simon joked about Freddie the Fibroid.
By the time it was removed in a hysterectomy operation it weighed almost 10Ibs – bigger than the average newborn baby – and equivalent to a full term pregnancy.

Real life health story to sell? Contact me to find out how to sell your story to a magazine >>>

Pregnant at 51? Or was it something more sinister? 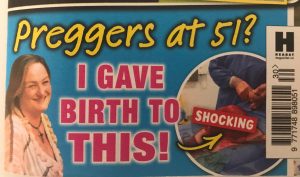 Staggering out I collapsed onto a bench in the changing rooms.  Maybe it was my age – 51 – but Boot Camp was much harder than ever I imagined it would be.

Still when I stood on the scales and saw I’d lost two pounds in a week, I knew all this hard work was worth it.

Back home my partner Simon was cooking tea. “Creamy curry tonight,” he said offering me a spoonful from the pot.

“Delish,” I agreed, “but don’t put too much on my plate. I’ve still got this tummy to lose!”

Simon came over and put his arms around me.

“Freddie food baby,” he said jokily as he rubbed my tummy.

That was his name for my tummy which despite my weight gain seemed to get bigger.

Of course it was all Simon’s fault that I’d put on weight.

Despite working for the same company for 20 years we’d never met until in April 2016 we were introduced in the pub by a mutual friend. Our eyes clicked. Since then we’d been inseparable.

Since Simon came into my life – with his love of cooking and feeding me – I’d got larger. Now I was determined to lose the pounds.

Only the tummy wouldn’t budge.  Over the past few weeks my expanding waist ensured I’d gone up two dress sizes.

Standing in front of the mirror I smoothed my hands over my belly.

Could I be pregnant?

In all the years it had never happened. I knew from some investigations years ago I only had one working ovary.  And a while ago my periods had stopped – something I put down to the change.

But lately I’d been feeling exhausted. And while the rest of my body was in shape, my tummy was getting to the point where I could barely bend over.

When I went out I’d catch my reflection in a shop window and think, ‘who’s that pregnant woman’ suddenly realising it was me.

A few times someone offered me their seat in a shop. And when I asked a shop assistant where the loo was, she said I could use the staff one. At the time I thought it was just someone being kind – now I realised with horror it was because she thought I was expecting.

The next day I asked Simon, “what do you think about my tummy?”

“What, Freddie?” he asked, ‘well, it is quite large and sort of egg shaped.”

That’s it, I thought, I’m going to see the doctor.

If I was pregnant … well, I didn’t know how I’d feel about it. But I needed to know.

The doctor prodded my tummy and looked aghast at the size of it.

“It could be a malignant tumour,” she said. As she explained she was getting me an urgent appointment, my head began to spin. 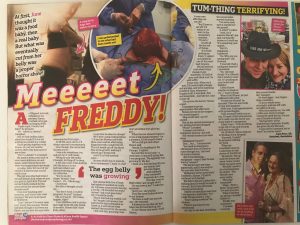 Simon was in the waiting room when I burst into tears.

“I might not have long to live!” I sobbed. He was as shocked as I was.

Over the next week as I waited for the scan appointment I could barely eat or sleep with worry.

Simon and I even booked a flight to see my family in Scotland for the day after the scan. I envisaged telling everyone I had cancer.

By the time the ultrasound scan day arrived I was a nervous wreck.

Getting on the table was an effort with my big bump.

The sonographer put the scanner on my tummy and moved the screen so I could see.

“Well, you’re not pregnant,” he confirmed, “ and it’s not a tumour either…”

He did some measurements. “It is a huge fibroid – around 20 to 30 centimetres large.”

He looked at my notes. A while ago the fibroid had been noted when I’d been investigated for heavy periods. Then I’d been given a coil with the doctor telling me the fibroid would shrivel and naturally disappear.

Instead it had kept growing … and growing.

“Freddie fibroid,” joked Simon. I could have hit him – but I was so relieved I laughed.

A month later in an operation Freddie Fibroid was finally removed.

The surgeon said: “Your uterus was the equivalent of eight and a half months pregnant and your ‘baby’ weighed almost 10Ibs.”

Doctors were so amazed they’d even taken some photos of Freddie. He was not an attractive baby.

Incredibly I immediately lost over a stone in weight.

“Better than any boot camp,” I thought to myself as I looked at my much slimmer figure.

Yes Freddie had left me with a battle scar stretching from pubic bone to belly button where he was removed.

And yes my bikini days might be over. But that doesn’t matter – I’m just relieved Freddie fibroid has gone forever.’

Sell my story to a magazine! Contact Featureworld to find out how to share your story in your favourite magazine…

Category: sell my story to Real People, Stories sold in 2017, Stories sold to a magazineBy Alison Smith-SquireAugust 18, 2017
Tags: Fertility
Share this post
Share with FacebookShare with TwitterShare with PinterestShare with LinkedInShare with WhatsApp