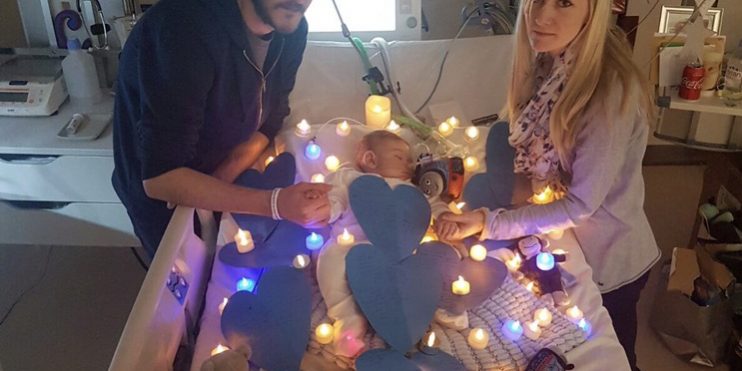 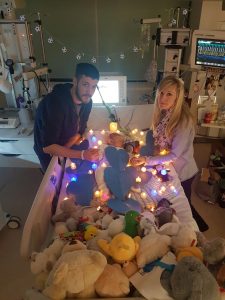 Charlie Gard with his parents

CHARLIE Gard’s devoted parents are embarking on a dramatic new court battle to save him.

Connie Yates and Chris Gard will plead with the Appeal Court to overturn the High Court’s ruling last month that he should be allowed to die.

They have refused to give up hope for their beloved nine-month-old son who is desperately ill with a rare genetic condition.

The latest on their story appears in the Daily Mail.

Connie, 31, said: ‘We were devastated by the result of the last hearing. But somehow Chris and I have pulled together and picked ourselves up as a family. We had to for Charlie’s sake. Charlie is still strong and stable. He is growing more beautiful by the day and we knew we couldn’t just give up on him. He has one chance of life and we will continue to fight for him.’

The couple have dispensed with the services of their former solicitors, Bindmans, and have hired a new legal team, led by eminent QC Richard Gordon, who is instructed by a new firm of lawyers, Harris Da Silva Solicitors.

The new lawyers did not want to comment ahead of the submission of the application to appeal.

But it is understood they are exploring whether human rights legislation can be used to give Charlie another chance, on the basis it should be up to his parents to decide what is best for him, and that neither doctors nor a court should ‘interfere’.

Last month, the baby boy’s parents were dealt a crushing blow when the High Court decided he should die. There were mournful wails of despair and Mr Gard, 32, sobbed ‘No’ as Mr Justice Francis concluded ‘with the heaviest of hearts’ to reject the distraught parents’ wishes.

Charlie’s type of mitochondrial syndrome is so rare, he is only the 16th sufferer in the world. The debilitating condition saps energy from the organs and muscles, and Charlie is being kept alive on an artificial ventilator because his lungs are so weak. But London’s Great Ormond Street Children’s Hospital, where he is in intensive care, wants to withdraw the ventilator and allow Charlie to ‘die with dignity’.

His British doctors believe there is no hope for Charlie, but his parents have found a specialist in America willing to try an experimental therapy.

However Mr Justice Francis, ‘with complete conviction for Charlie’s best interests’, agreed with the London hospital that it would do the little boy more harm than good to fly him to America for an untested treatment.

The couple’s battle for their son prompted an extraordinary outpouring of public support which saw 83,000 well-wishers donate more than £1.3million to a GoFundMe online fundraising page to pay for the experimental US treatment.

Connie: ‘Following the High Court case, Chris and I decided to seek fresh legal representation. We now have an amazing legal team supporting us, working with us.

‘We believe it should be our right as parents to take our son to a specialist hospital. We cannot comprehend why, as the hospital and doctor who have offered the treatment are so respected, we are not allowed.

‘We would not be continuing this fight if we were not absolutely certain it was in Charlie’s best interests.’

Before he was hired, the couple’s new lawyer Charles da Silva wrote on his public Facebook page that the High Court ruling ‘highlights that not only doctors but judges can get it wrong too’.

He said: ‘The real issue is, who is the decision maker on behalf of this baby? Whether this baby should receive treatment abroad or not should rest with the parents who, in law, have parental responsibility to act in his best interests. Unless it can be shown that the parents are not acting within the reasonable bounds of decision making, it should not be for the doctors or the courts to interfere. For the parents to exhaust every possible avenue (however small) to save their child is not unreasonable.’

Mr da Silva, referring to an internal email sent by one of the Great Ormond Street doctors about the parents, which emerged in court, added: ‘However, the doctor’s interference in preventing the parents from obtaining treatment (however remote its likely success) and labelling the parents as a “spanner in the works” speaks for itself.’

The judge ruled that Charlie had suffered severe and irreversible brain damage and that the experimental treatment was ‘potentially painful but incapable of achieving anything positive for him’. He said the medical experts all agreed that the US treatment could not reverse Charlie’s brain damage, and said ‘experimentation’ was not in the child’s best interests, unless it could improve his condition.

Connie, of Bedfont, South West London, said: ‘It was agreed between ourselves and the American doctor that we would try the treatment for a trial period – and if there was no improvement, or it caused Charlie pain, we would let him go. A month ago, our GoFundMe page reached its target. By now, we could be in America starting Charlie’s treatment. Instead it is deemed in Charlie’s “best interests” to remain in the UK without treatment.’