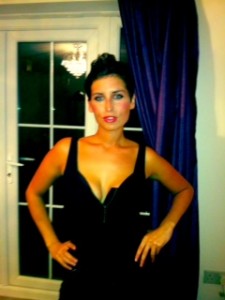 The test of a good therapy is one, does it work and two, would you use it on one of your own family… and would they let you.

Danielle Davies had no qualms about letting mum hypnotise her into thinking she had a virtual gastric band.

After all mum Bev Davies, a professional hypnotherapist with over 20 years experience, has treated hundreds of people successfully with  hypnosis.

But both mum and daughter were unsure if it would work – simply because it was mum treating her own daughter.

However, the treatment has been extraordinarily successful. Danielle, who previously weighed 14st has dropped from a dress size eighteen to a size eight, and now weighs just eight stone – after her mum’s amazing therapy. 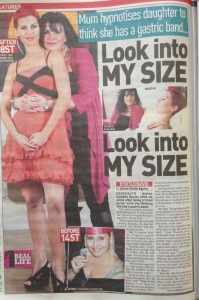 Danielle put on weight after splitting from a boyfriend when she found herself comfort eating. At the same time, she was living away from home in Rotherham so relying on convenience foods and takeaways.

She had tried conventional diets but although they worked initially,  the weight always came back.

Danielle has now maintained her new figure for about a year – and without any of the hassle of denying herself food as thanks to mum’s hypnosis, she naturally has a smaller appetite.

“I just can’t thank mum enough – I am thrilled with my new figure,” says Danielle. 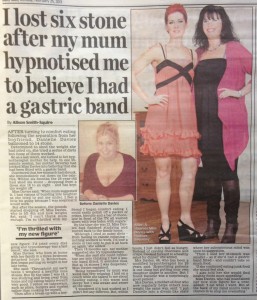 Featureworld was delighted to have gained publicity for Bev and Danielle in two top newspapers, The Sunday People and the Daily Mail.  Their amazing story is now set to appear over two pages of a women’s weekly magazine!

Do you have an inspirational weightloss story to sell? If so, do let us know by filling in the form to the right of this page…