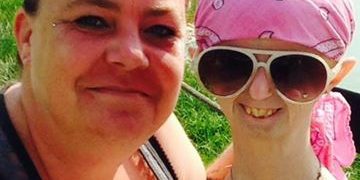 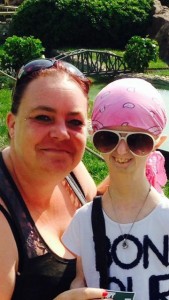 At the age of almost two Hayley was diagnosed with progeria, a disorder which make the body age prematurely, giving her the body of someone aged 104.

Hayley was not expected to live beyond her 13th birthday. But incredibly she did –  writing two books and going on to go to college to study media.

At the same time she appeared in a series of Channel 5 documentaries, met celebrities and travelled the world.

And I placed Hayley’s inspirational story in a number of newspapers such as the Daily Mail, magazines, such as Woman and television such as ITV This Morning. 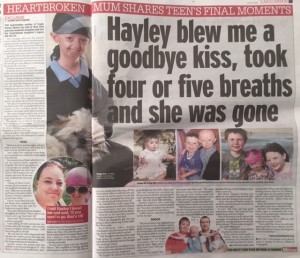 Hayley … in the Sunday Mirror…

Sadly however, three days ago at the age of 17 Hayley passed away.

I have now helped mum Kerry make a wonderful tribute to her daughter, which told of her final last hours and took a look back at her extraordinary life.

It appears over two pages of the Sunday Mirror newspaper.

In it, Kerry told how she and former husband Mark were both with Hayley when she took her last breaths.

Incredibly just hours earlier Hayley had begged doctors to allow her to go home for a break. Over the last two weeks she had been battling pneumonia but it appeared she was getting better.

She spent a precious three hours with her family sat on her favourite sofa in the front room before going back to the hospital for the night.

However, shortly after arriving back in hospital, Hayley took an unexpected turn for the worse and died.

Hayley loved life – she was a vibrant young woman who was excelling at her media studies and wanted to become a celebrity journalist.

Thanks to pioneering drugs, care from her family and the will to make the most of life, she was gaining top marks at college and hardly needed a day off.

So her death has come as a huge shock to her family.

Kerry now plans to have her daughter’s ashes made into a diamond ring. You can donate to this by going to GoFundme.com/pkzuio.

Meanwhile any cards can be sent to the family at Abstract Amour, 24, St Leonards Road, Bexhill on Sea, East Sussex, TN40 1HT.

Read more – Hayley’s books, Old Before my Time and Young at Heart are available from Amazon.

If you would like help getting coverage of your story in the press, a magazine or on TV, do contact me for free advice…

Category: Sell my story to the Mirror, Stories sold in 2015, Stories sold to newspapersBy Alison Smith-SquireApril 4, 2015
Tags: Health storiesShocking real-life
Share this post
Share with FacebookShare with TwitterShare with PinterestShare with LinkedInShare with WhatsApp